Wednesday, June 13th
After finishing my Clock Tower tour, now that I understood all about the different ways the time was displayed, I wanted to watch the time change and the bell rung by the Mori. I took another little video of the time changing and bell ringing but again, I need to figure out how to do the youtube thing before posting the video.

In addition to the time that is displayed with the numbers on the two wheels (see previous post), there are two more clock faces. The clock face on the front of the tower under the Virgin Mary displays the time of day, the Zodiac sign, and the current phase of the moon: 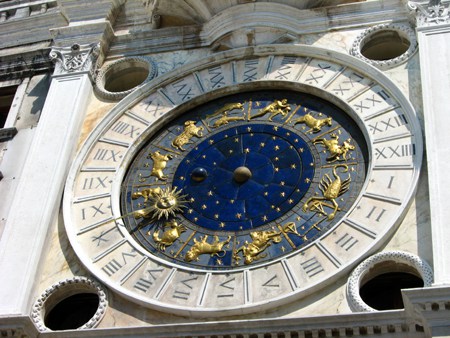 The clock face on the back of the tower, which you can see when taking the street to Piazza San Marco (St. Mark’s Square) I believe only displays the time: 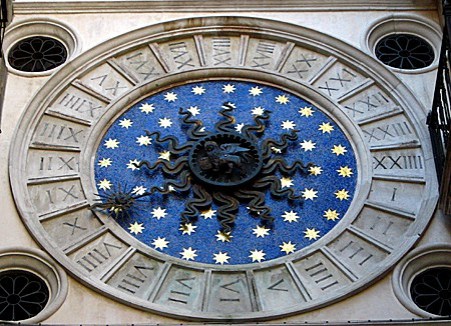 It was a little after 11 am. I realized there was only a tiny line to get into the Basilica di San Marco (Saint Mark’s Basilica). I hadn’t planned to go into the Basilica as I had been before, but I couldn’t resist with such a short line!

My first stop inside was to go up top where the horses are located to get yet another view of the Clock Tower as well as the rest of Piazza San Marco. It was pretty packed but I managed to find a few spots which were not so crowded. For those that don’t know, the horses up on the balcony are replicas. The original horses are located inside and with no photos allowed.

Here is my favorite picture of one of the horses on the balcony: 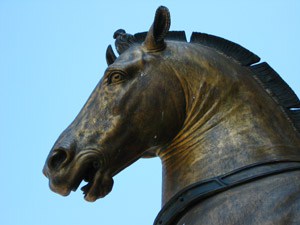 I wanted to get a good picture of the 4 horses up close, but a girl was posing for the longest time right under the horses.  I don’t think she had a clue that the rest of the people on the balcony were not interested in taking a picture of her with the horse as a momento.  I finally gave up waiting and took a picture and then cropped her out, but that also meant cropping out part of the horses. 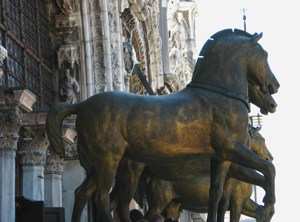 Here are some more pictures I took while on this amazing little balcony with the 4 horses: 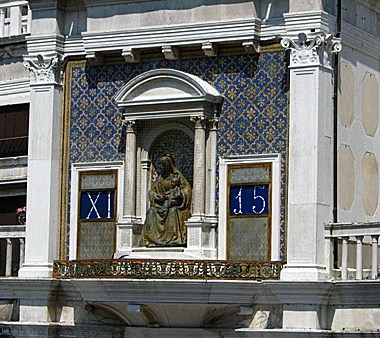 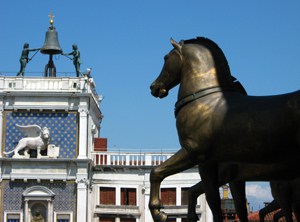 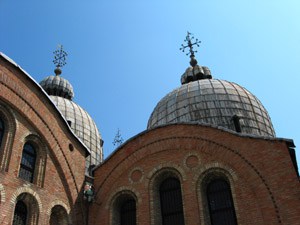 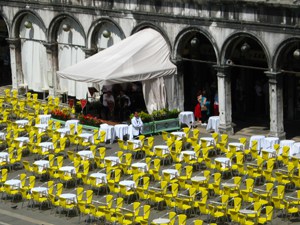 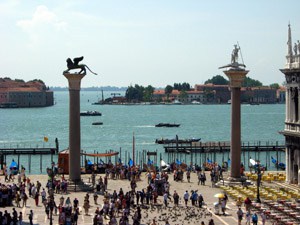 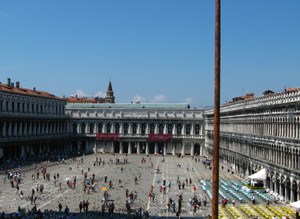 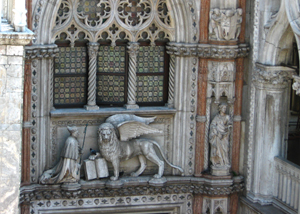 I snuck a picture of the inside of the Basilica from the balcony. Unfortunately no photos allowed inside. The mosaics are incredible. The picture ended up a little blurry but for those who have never been, it at least gives you an idea of what the inside looks like. 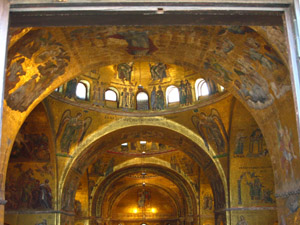 After touring the rest of the Basilica di San Marco, my stomach started to grumble. I had found a place I had read about in Chow Venice Tuesday afternoon called Osteria da Alberto. I had read that this place fills up quickly. When I arrived, there was only one other couple at a table which was nice as it ended up being easy to get a table. I had the ravioli with swordfish, shrimp, and zucchini. It was delicious!!

Wednesday was an ambitious day for me. Since the past two days were cloudy and rainy, I figured I better take advantage of the good weather and the clear skies for good views. I headed back to the San Marco area and took a vaporetto over to San Giorgio Maggiore to go to the top of yet another tower. This one however had a lift so it was sort of cheating as far as towers go. I will post another thread with pictures from San Giorgio Maggiore.

2 thoughts on “visit to the Basilica di San Marco”