Friday, June 15th
Friday was my last full day in Venice. It was an overcast day which reflected my mood as I was not yet ready to leave Venice. My first stop of the day was to a little pasticceria shop on Strada Nova in Cannaregio for my morning coffee and a pastry. I ordered one of those delightful pastries from Naples called a sfogliatelle.  The pastry was delicious but there should be a warning placed on this pastry saying “Do Not Eat in Public”. I made such a mess. I must have gone through at least 10 napkins.

After leaving the pasticceria, I wandered through more of the Cannaregio area. I wandered down the Fondamenta degli Ormesini, through the Ghetto area, and also down the Canale di Cannaregio. I took some photos along the way: 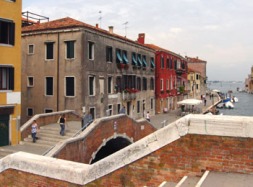 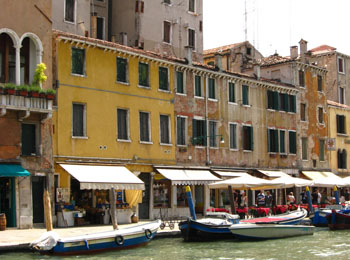 One of my “to do” things for the day was to get to a post office. I wanted to mail the cards I tried to mail while in the Newark airport and I also wanted to mail a small padded envelope full of stuff about Venice, which I would no longer need. I remembered seeing a Postale sign when walking to the train station the day before. While walking towards the train station, I saw an arrow pointing down a side street where I found a little post office. As I waited in line, I rehearsed my Italian vocabulary that I would need to mail my cards and padded envelope. There are two places I am still intimidated by when in Italy – the post office and the grocery store (the power those ladies have sitting on their little thrones at the cash registers).

When it was my turn in line, I stepped up to the window and nervously passed my 3 cards through the little slot, asking to have them mailed to the US. The cost for each card was only .85 each, which I thought was a great deal! I then tried to fit my padded envelope through the slot. It was too thick. I had no idea what to do next. The woman sort of rolled her eyes, told me to wait, and then pushed some button, and magically the slot became slightly wider to accommodate my envelope. I had read that the Italian post office system likes to have packages mailed using their special yellow boxes and so I was a little nervous that my padded envelope that I brought with me from the US would be rejected. Fortunately it passed the test.

The package cost 8.70 euros. I wasn’t expecting the cost to be so high, but splurged, and decided to mail it as it would save a little weight and space in my bag for the rest of my trip. Note: I am happy to report that my package arrived safely and was waiting for me when I arrived home.

I have never walked to the Piazelle Roma area and so after leaving the post office, I headed that way. My goal was to see as much of Venice as I could. I wandered through some of the streets in this new area of Santa Croce and then thought “La Zucca”!! La Zucca is a restaurant I discovered during my last trip to Venice and has turned out to be one of my favorite places to eat in Venice. It is usually pretty crowded and often reservations are a must. I was thrilled that tables were available when I arrived for lunch. I ordered my favorite Taglietelle con Ricotta, Pecorino e Pomodoro and a salad and savored every bite. If anyone is able to get me the recipe to this amazing pasta dish, I would be forever grateful. 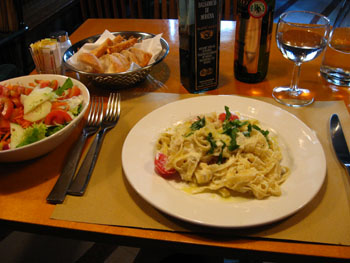 After lunch, I took the vaporetto from the San Stae stop to the San Angelo stop. My one must for the day was a visit to La Fenice. When looking at the map, the San Angelo stop looked like the closest stop. Somehow though as usual, I became slightly lost. I ended up in Campo San Stefano.

I had never been in this campo before but have often read about it. Campo San Stefano is another one of the campos where a person could spend hours just sitting and people watching. I was thankful for getting lost and discovering this campo. After a little more wandering, I found La Fenice.

The ticket to visit this opera house cost 7 euros, which included an audio guide. I loved loved loved this tour. I can’t believe it has taken me four visits to finally visit La Fenice! This website has a couple of nice pictures and some general information about La Fenice. This website gives a nice summary of the history of the opera house.

No photos were allowed inside but we were able to sit in the Imperial Box and wander through much of the opera house while listening to the history and reconstruction information at each station along the tour. The tour lasted about an hour and ended just as they were closing. I would highly recommend this tour to all. It was one of the highlights of my stay in Venice along with the Clock Tower tour.

This picture was taken from the back of La Fenice:

After leaving La Fenice, I headed to the Santa Maria del Giglio vaporetto stop (which I discovered while looking for La Fenice). I just missed the vaporetto heading back towards the Rialto Bridge and instead took a short trip over to the Chiesa di Santa Maria della Salute to take a peek inside the church, figuring that I could catch the next vaporetto heading back towards the Rialto Bridge instead of just waiting at the other vaporetto stop. Last summer, I spent some time photographing this beautiful church but did not get to go inside since the church was closed when I was there. I was disappointed to discover that this year the Chiesa di Santa Maria della Salute was covered in scaffolding, but the good news was that the church was open. I took a quick peek inside and then caught the next vaporetto back to the Rialto Bridge.

Once back at the Rialto area, I did a little shopping. At one point, the skies turned black, and then the sky opened up and it started to pour. I hurried on back to my apartment and later saw on the TV that there was a destructive tornado in Mestre at an outside concert that occurred about the time that the sky turned black in Venice. We were very lucky that all we had was rain.

My last dinner in Venice ended up being a little disappointing. I had made reservations the day before to eat at Vini di Gigio. I was really looking forward to this dinner. I got all dressed up, wearing my nice skirt and nice shoes. When I arrived, I was seated in the second room. I noticed right away how cold it was with the A/C on and wished I had brought my sweater. I was seated at a table in the back corner next to a group of 3 American couples. I should have asked right away to be moved to the other room as it was not as cold, but when I entered the restaurant, I noticed that all of the tables had reservation cards on them and I didn’t realize at the time how uncomfortable the AC would end up being.

The waitress was extremely nice and attentive. I ordered scallops as an appetizer and then a pasta with crab for my main course. Throughout my time in the restaurant, I could not help but overhear the people at the table next to me. They were very loud, as if they were the only people in the restaurant and were having a private dinner party at their house. They talked about fundraiser dinners that they throw for big charities, about all of their trips, as well as a variety of other topics. Football, specifically college football, seemed to be another main topic. There was even some gossip discussed about some player getting kicked out of college for something.

At one point, they became upset at the waitress for messing up their order. I felt bad for her as she seemed to be very kind and they were not very gentle about pointing out her errors. I was not there when they ordered and so I can’t say for sure if the error was indeed the waitresses fault or perhaps a misunderstanding with the language translation but it was the way they spoke to the waitress that really bothered me.

I tried my best to ignore the chatter and reflect on my time in Venice, look at some of my pictures on my camera, and write in my journal, but it was pretty hard to concentrate. I noticed that most of the other diners in this room were also Americans. I wondered if the “local” diners or more regular customers were seated in the other room. I also wondered if perhaps the Americans were seated in this room because it is sometimes a generalization that Americans like cold air-conditioned temperatures. These were all just questions and not accusations of the restaurant. I just did not feel the same “warmness” that I felt at La Zucca.

My scallops were very delicious, but for the price, I was expecting more than 3 scallops. My pasta was good but not great and it was a little on the dry side. I was not feeling that well by the end of my meal and ended up passing on dessert, just asking for the bill. I was glad to warm up a little when I went back outside. I would like to give this restaurant another try as I have read wonderful things about this restaurant, but next time I would insist on sitting in the first room and not next to a large party.

Although my dinner did not turn out to be the most wonderful dinner, I still had one of my favorite meals of my trip at lunch and a wonderful time touring La Fenice. All in all, my last day in Venice was a great great day. I am already dreaming about all the places I want to visit during my next stay.

2 thoughts on “my last day in Venice”