One of my favorite places on the Ligurian Coast in Italy is the little fishing village of Camogli. I first learned about Camogli while watching the filming of The Bold & the Beautiful in Italy.

For those of you who are not familiar with The Bold & The Beautiful, it is a daytime soap opera, one of two I was addicted to for years and years. I can now proudly state that I am no longer a daytime soap addict. I am thankful however that I was addicted back in 2002. If I wasn’t, I would not have seen Brooke, Thorne, Macy, and Ridge in Camogli.

I was immediately struck with the beauty and charm of Camogli when watching the scenes being filmed there. I knew right than while watching that show that I just had to go there one day. I went the following summer.

The beach in Camogli:

View of Camogli by boat: 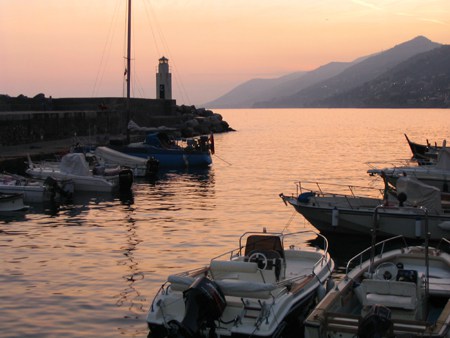 The funny thing is that I also learned about the Scala Contarini del Bovolo in Venice through The Bold and the Beautiful, when they filmed previously in Venice and also I believe Lake Como. Again, Thorne was chasing Brooke up the tower, or was it Ridge chasing Brooke?

Leslie’s Kaleidoscope blog has a great post on the Scala Contarini del Bovolo. Maybe I should start watching The Bold & The Beautiful again. I might be missing out on some more great places to visit in Italy :-)

6 thoughts on “how I learned of Camogli”