Last night I watched one of my favorite musicals, The Sound of Music. I love storybook tales and this one has such a great ending with the family escaping over the alps by foot into Switzerland. I was crushed when I recently learned the real story of the von Trapp family. They did not escape over the alps but instead left by train. I guess it was a better way to leave the country but certainly not as romantic and exciting as escaping by foot over the alps. There are quite a few differences between the movie and the real story of the von Trapp family, but for me, I will always have the movie version to dream about.

My favorite song in this movie is Edelweiss. It is a song written about a small white flower found in the alpine hills. It was the last song ever written and composed by Richard Rodgers and Oscar Hammerstein II. Although many assumed that Edelweiss was an Austrian folk song or even the Austrian Anthem, in actuality it was an American song. In fact, most residents of Austria do not even know the song Edelweiss. They only know about the movie because of the “Sound of Music” tours in Salzburg.

In the movie, Edelweiss is sung twice. The first time Captain Von Trapp (Christopher Plummer) sings the song at his villa after he rediscovers music thanks to Fraulein Maria (Julie Andrews). The second time the song is sung at the Salzburg Folk Festival.

**EDITED: The original video I posted was removed. Here’s another video… although you need to click on the video to take you to youtube to watch it…

…and here’s a photo of the edelweiss flower (formerly known as Leontopodium alpinum), which is the national flower of Switzerland and belongs to the sunflower family. That must be why I love the flower and song! 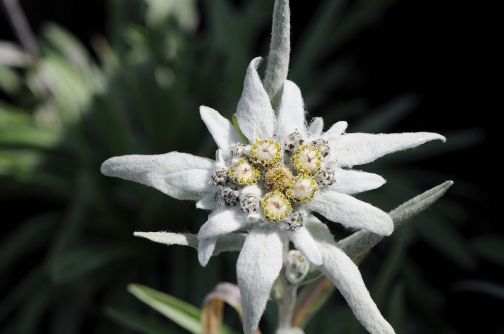 photo by Böhringer Friedrich ~ from wikimedia

*EDITED  … posted a new flower photo – the original flower photo I posted no longer could be linked to its photo source.