Congratulations to Jon Lester, who became the first pitcher this season in the Major Leagues to throw a no-hitter. I am in awe of anyone who throws a no-hitter. For this 24-year old lefty pitcher, it was something extra special. Jon Lester was diagnosed with a rare form of non-Hodgkin’s lymphoma in August 2006. He stopped playing baseball and started treatment. He returned to the Red Sox, pitching and winning his first game since being diagnosed on July 23, 2007. I remember how emotional that game was. He then went on to pitch the 4th game of the World Series on October 28, 2007 to clinch the 2007 World Series. And now today, to pitch a “no no”, what a special accomplishment he has achieved. 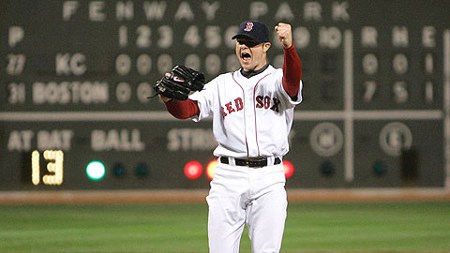 For those wondering, a “no-no” or a “no-hitter” means that no one on the other team gets a hit during the entire game. The scoreboard will reflect this by a 0 under the H (R H E – Runs, Hits, Errors) on the right side of the scoreboard.

For a little more trivia:

*This was the first no-hitter thrown by a Red Sox left-hander since Mel Parnell threw one against the White Sox on July 14, 1956.

*Jason Varitek was the first catcher to be behind the plate catching 4 no-hitters (4 different pitchers/4 no-hitters).

I am so glad for once I left work on time. I checked the Red Sox score (as I always do) when I got home. Because of the time difference, night games start at 1pm here so the game was well underway. Once I saw that Jon Lester was working on a no-hitter, I signed into the MLB audio (Red Sox radio broadcast) and caught the end of the game. After the last pitch, ESPN showed the final strike as well as all the hugs on the field after the game was over. I got pretty choked up watching everyone congratulate him. It was a definite “tear jerker”. What a great inspiration and an amazing accomplishment!