It was a Wednesday in June 2005. I was staying in Bellagio on Lake Como. The prediction was for temporale that day (bad weather). I woke to overcast skies. I hung out for a while watching the weather trying to decide what to do.

The day before I walked all over Bellagio, got lost a couple of times, but had a wonderful time following the Bellagio walking tour. My feet and toes were pretty tired after a long day of walking and so I decided to spend the day on the boat, heading to Colico, the farthest point north on Lake Como, hoping that the weather would hold up for the day.

The first boat leaving (except the rapido boats) was at 11:30. I gathered up my things and headed down to the boats. The boat was not very crowded due to the unsettled weather. I found a great seat with a wonderful view and took lots of pictures on the ride up north. You can see my photos of the boat ride here. I enjoyed some cheese and some fruit on the way while checking out the towns along the lake. Many of the towns seemed much smaller to me than the towns on Lake Garda.

When I arrived in Colico, everything was closed except for a few bars. My original plan was to take the rapido boat back but because my boat was late to arrive in Bellagio, the rapido boat beat my boat to Colico and was heading back towards Bellagio just as we arrived. The next boat was scheduled to arrive in about 40 minutes. I walked around the town and found a little gelateria that was open while waiting for the boat.

View of Varenna from the boat:

I took this photo of my shoes while walking in Varenna.

As I arrived at the little waterfront area, I saw the cutest baby ducks (5) with their mamma duck in the water. The song 5 Little Ducks started playing in my head.

I spent quite a while taking pictures and watching the little ducks swim around. A grandmother with her two little grandchildren came by and started feeding the ducks. 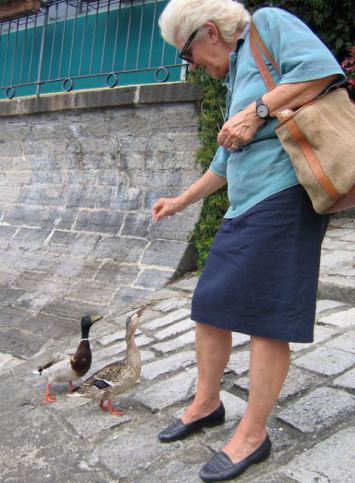 I was so busy taking pictures, watching the ducks, and the little girls, that I didn’t even notice that the sky had turned black! I walked a little ways farther towards a hotel I had thought about staying at (the yellow building on the right side of the photo of Varenna) to get some information when the rain began. The man at the desk was very kind and let me hang out in the lobby for a little while. I asked him what he thought – if it would be a quick storm or a long storm. He predicted a long storm.

The temperature cooled about 20 degrees from the mid 90’s to the 70’s once the storm started. I was not dressed for the cooler weather, although I did have my raincoat with me. I decided to walk back to catch the next boat that was scheduled to arrive in about 15 minutes.

Just as I arrived at the area where the boats arrive and the tickets are sold, it started to rain quite hard and the wind started blowing all over the place.

This is where we all waited out the storm (I took this photo when I arrived in Varenna before the weather turned nasty):

It was difficult trying to stay dry under the little tin roof. There were about 15 or 20 of us waiting for the boat. Next, lightening started to flash. Everyone tried to get pictures of the lightening but the rain was blowing straight into us and I didn’t want to get the lens wet so I put my camera away. Then we heard this loud noise that sounded like someone was shooting a gun at us hitting the roof!

It was HAIL – Grandine!! At first the hail was about the size of marbles. It was falling pretty quickly and the noise was unsettling.

The woman, who was safe and dry in her little ticket booth, not seeming to care at all about our safety, got out and moved her car under the covered area where we were all standing. This left us with a much smaller area to hide under so as not to be hit by the hail. The hail started getting bigger, and no exaggeration, it had to be the size of golf balls. Hard ice balls. We could pick them up as they fell by our feet.

An even scarier thought was getting on the boat when it arrived. It was late as usual, but this time, it was easy to understand why. Fortunately the hail stopped right as the boat arrived. We all boarded quite quickly. Once on the way to Menaggio, the hail started up again for a short while. I think the storm was following us. When we finally arrived at Bellagio, the storm seemed to let up. I sure was happy to be back at my home base to take a warm shower and get into some warmer clothing being the cold weather wimp that I am.

And, every time I see the photo of my feet and shoes, I think of those cute ducks and I think of  standing under that tin roof during a wild hailstorm.