Early Friday evening, as I drove over to a nearby school to drop off a couple of bags of recycling stuff, a few pretty wild bolts of lightning lit up in the sky. Lightning is pretty rare here in Hawaii. I could barely hear the thunder, so I assumed storm had to be far off in the distance.

The above photo was taken by Dave Weil of Wahiawa. I found this photo on the KHNL news website.  (click on the photo for more info/photo linked to the source along with an article about the power outage).

About 30 minutes after I returned home, a little after 7 pm, everything went black. At first, I figured it would only be out for a few minutes. After about 15 minutes, I thought that it was probably just my area of the island that was out. I watched a DVD on my computer to pass the time, still thinking that the power would be back on pretty soon. Two hours later, when my laptop was running out of juice, I decided to call the electric company to find out what was going on. I was surprised to learn that the entire island was in the dark. I found my radio and was grateful to find a few stations reporting what was going on.

HECO, the electric company, was saying something about four lines being tripped which caused the entire system to shut down. All the stations were saying to expect the power to be out throughout the night. The last time power went out island wide was October 15, 2006 when an earthquake hit the Big Island.

Because the entire island lost power, that meant that President-elect Obama, who is vacationing here with his family, also lost power. The mayor was in contact with his staff. Obama was safe at his Kailua rental. He was offered a generator but declined the help saying that they were planning to go to bed early and would be just fine.

I was much better prepared this time than I was two weeks earlier. I still had a big bag of ice and a half full bag of ice in the freezer. The very cool flashlight app on my new iPod touch came in handy helping me navigate in the dark. I listened to the radio for while, and then went to bed. I unplugged all of my electronic equipment but did leave all the light switches on hoping that in case the power come back on in the middle of the night, I would wake up since my refrigerated perishables were now in the freezer… and at 3:13 in the morning, the power came back. The lights woke me up as planned. My area of the island was one of the first to get electricity back. I was very grateful to have power again. I checked the Honolulu Advertiser for the latest news. Only a few areas were back up. I even got electricity back before Obama did! He got his back about 6 am. Some areas didn’t get their power back until last night and a few people were out until this morning. A few areas even lost water for a while.

While the power was out island wide, traffic was crazy and there were many delays and cancellations at the airport. Some people ended up sleeping there overnight. Not fun. At least the weather was warm here. The scariest thing I read was that a Hawaiian Airline jet was struck by lightning. The jet landed safely but that must have been pretty scary!

Below are a few more photos of Oahu during the lightning storm and in the dark. The first photo came from the Star Bulletin and the second tow photos came from the Honolulu Advertiser. They were liked to the original source but unfortunately the links no longer work/take you to the source. 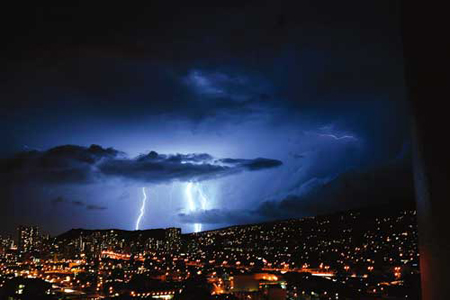 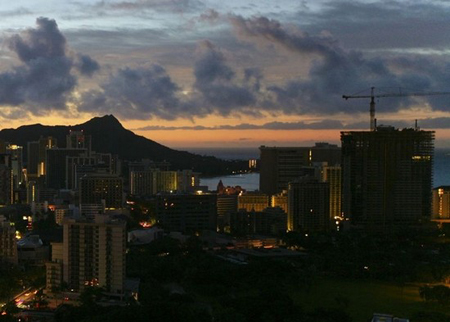 They are still not sure what caused this island wide power outage. Originally, it was thought that it was due to a direct lightning strike, but no damage was found to any of the lines or equipment.