I took this photo of the famous Grossmünster Cathedral while in Zürich in 2003. The billboard just happened to be in front of the cathedral. 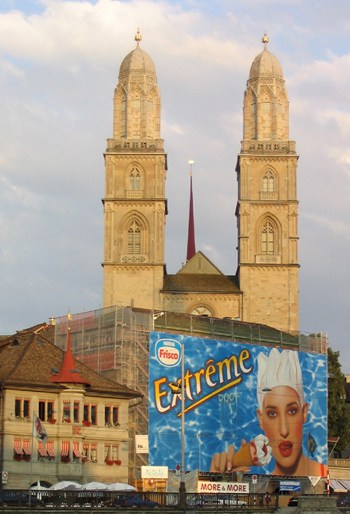 The two towers of Grossmünster Cathedral:

Close up of the other tower (taken from the top of the tower I climbed): 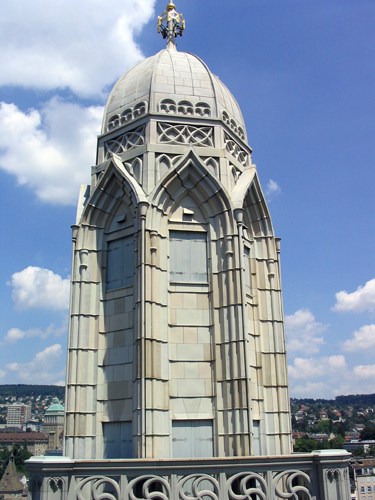 Views of Zürich from the top of the Grossmünster tower:

A few fun facts about the legend of the Grossmünster:

According to legend, the Grossmünster was founded by Charlemagne after his horse bowed down on the spot marking the graves of three early Christian martyrs.

In the 3rd century, Felix and Regula were members of an all-Christian Roman legion that was to be executed en masse in southwest Switzerland. They fled with their servant Exuperantius and got as far as Zürich before being tried and executed in 286 AD.

According to legend, the governor plunged the three saints into boiling oil and forced them to drink molten lead. The trio still refused to renounce their faith and so were finally beheaded.

Fortunately, the martyrs still had enough energy to pick up their heads and climb to the top of a hill, where they dug their own graves and then interred themselves.