The Yankees were in town for the second three game series at Fenway this week. The Sox were already up 5-0 after sweeping the Yankees three games at home in April and two more in the new Yankee stadium in May. I always love to see a sweep but realistically I figured we had a chance to win two out of three.

Tuesday was my last day at work (officially anyways – three more meetings to attend). Kids got out on Monday and Tuesday was a half day to close up the classroom and get all of the last minute things done. I rushed home after work to listen to the game on Game Day Audio that afternoon (games start at 1:10 pm here).

We ended up easily winning Tuesday’s game thanks to Beckett’s pitching. Scoring a lot of runs also helped. Big Papi (David Ortiz) has been struggling this year. Many sportswriters have already written him off. He blasted a two run homer in the 2nd, his 3rd home run of the year. The fans went wild. The stress of the end of the school year must have caught with me because I ended up falling asleep right after Big Papi’s home run and then woke up just before Nick Green hit a home run. Final: Sox 7, Yankees 0

Wednesday night’s game was on ESPN. It ended up being a nail biter. We were ahead 6-2 but the Yankees slowly came back. With the score 6-5 after two home runs in the seventh, Okajima came in and kept the score at 6-5. Jonathan Papelbon, who was sick the night before from food poisoning, pitched the ninth inning and closed out the game for the win. Final: Sox 6, Yankees 5 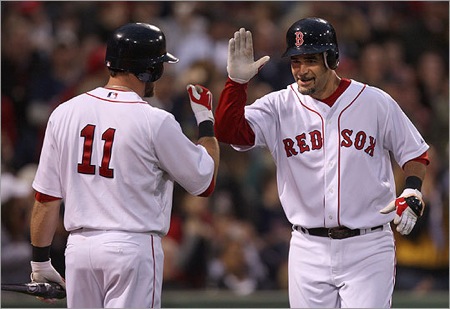 (Mike Lowell being congratulated after a solo home run)

With seven wins in a row against the Yankees, could the Sox pull off another sweep? Tonight’s game ended up being another close one! The game was not on TV so I listened to it on Game Day Audio again (this time not falling asleep). It ended up being a great game (for a Sox fan).

Brad Penny pitched a great game not allowing any runs six innings. Big Papi hit a solo home run, his 4th of the year and second of the series off the first pitch in the 2nd inning. The game stayed at 1-0 through the 6th. In the 7th inning, the Yankees scored 3 runs of a pitcher who usually pitches well. It wasn’t looking good as it started to rain. I was worried the game might be called. Even though it was raining, the stands were still full. The Sox rallied back in the 8th to score 3 more runs and the crowd went wild. Papelbon came in and got the save in the ninth. Not only did we win, but we swept the series!!! Final: Sox 4, Yankees 3

10 more games to go this year with the next Sox/Yankees game set for August 6th in the Bronx.