*I am writing most of this post about my fabulous day in Arezzo from trains heading to Arezzo and then back to Florence.

Saturday, June 27th:
Ate a quick breakfast Saturday morning. Weather forecast says rain at noon in Florence, Siena, and Arezzo.  Decided to head to the train station to take a daytrip, hoping for nice weather (or at least no rain) for the morning hours.

It was an easy 15 minute walk to the train station.  When I arrived, I decided on going to Arezzo since that was my original planned first stop in Italy this summer.

There were 2 trains – the 9:08 train, which had a few more stops and would take longer to arrive in Arezzo and the 9:13 train that is quicker, heads to Roma and stops in Arezzo along the way.  Of course just when the slower 9:08 train departed, the partenza (departure) board announced that the quicker 9:13 train would be 40 minutes late!

I noticed that the board indicated that another train left for Arezzo at 9:33. I checked with one of the automatic ticket machines (going through the steps to purchase a ticket) to see if my ticket price was the same for the 9:33 train and then double checked with a train person and am now sitting on this train typing this while waiting for this train to leave.

Yay! The train’s engine is revving up and we are leaving on time!!

Well I am not sure how brilliant that plan was.  I only arrived 3 minutes faster than the quicker 40 minutes late train arrived.

The weather was overcast with the sun peeking in here and there when I arrived. The main street leading up to the historical center is called Corso Italia.  It is a pedestrian only street and it was packed.  It reminded me of the afternoon passiagiata that takes place all over Italy.  People were out greeting each other and going in and out of the various stores. 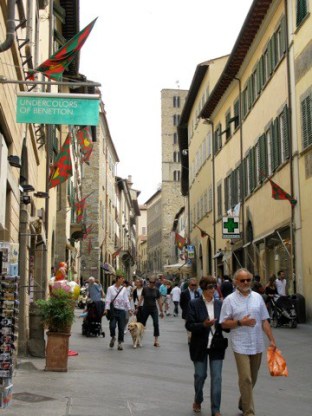 I was tempted to check out a few stores but only had an hour or so before the churches I wanted to visit closed until opening again late in the afternoon.
The last time I was in Arezzo, I missed out going inside the Duomo and I did not want to miss it again.

I stopped in a couple of other churches along the way before reaching the Duomo which is located at the top of the hill. When I went inside, I discovered a wedding taking place.  I usually only stay for a minute or two when there is a wedding occurring but this time I stayed, watching the rest of the ceremony.

Most of the mass was completed.  What I saw was the personal touch to their ceremony.  It was such a joyous occasion that it brought tears to my eyes a few times during the ceremony. 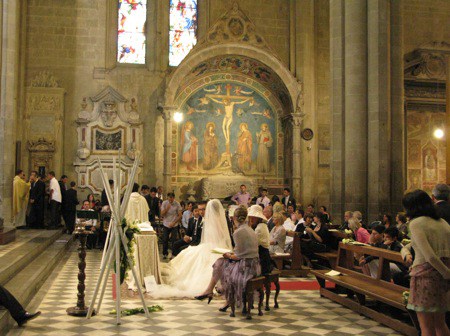 Not only was the wedding beautiful, but the Duomo itself is quite a gem.  There is a famous Piero della Francesco fresco in this church. 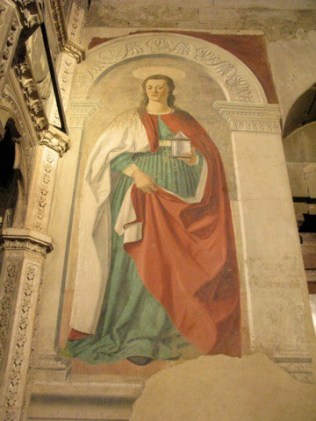 While watching the end of the wedding ceremony, I met a lovely couple from Bologna.  We chatted for quite a while.

After watching everyone throw rice at the bride and groom, I headed towards Piazza Grande.  This piazza was made famous from the movie Life Is Beautiful. The sun was shining and the piazza was even more beautiful than I even imagined it could be.  The last time I was in Arezzo, there were barriors set up in the piazza ruining the perfect photo opportunities. 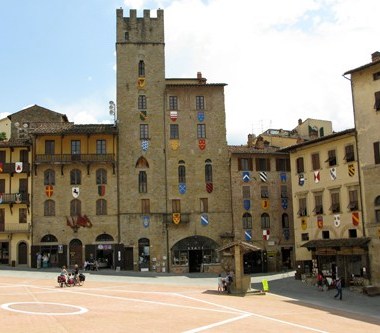 After taking tons of photos, I started thinking about lunch. I definitely wanted to eat at one of the places that overlooked Piazza Grande. I just had to decide which one. I noticed my new Bologna friends sitting at the restaurant at the end of the row. I figured that if they were eating there, it had to be good. I just missed getting a front row view table but the view was still wonderful. 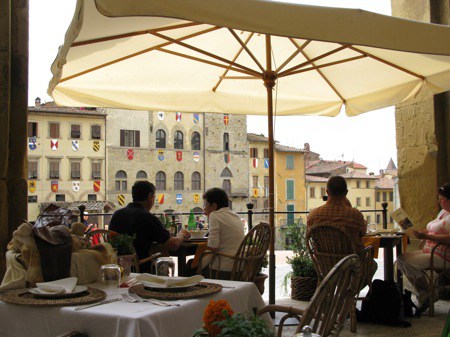 (The couple from Bologna are on the left, sitting in front of me.)

I ordered bruschetta and penne all’ arrabbiata. Before the bruschetta was brought out, I was served a small bowl of soup (some sort of potato flavor) which was delicious along with 3 little bread pupu treats. I am so glad I decided to eat at La Lancia 8 Oro. The food, service, and atmosphere were all terrific. So far, best meal of the trip.

While eating lunch, the bride and groom were having photos taken of them right by my table.

After lunch, I walked around Arezzo taking more photos. Here are a couple… 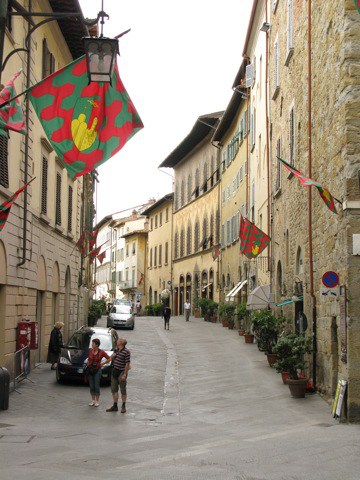 The skies started to get dark after I finished lunch.

Around 3 pm, it started to rain (big drops). I headed back to the train station and arrived just in time to catch the next train back to Florence (3 minutes to spare plus 2 extra minutes because of course the train was a little late). Since it was a regional train, I was able to buy my ticket at the newspaper/magazine stand.

As I am on this train, it is now pouring outside and I can see lightening and hear thunder crackling!  I wonder if sitting in a metal train car is a good thing to be doing when there is lightening happening. I don’t think I have shared this before but I am terrified of thunder and lightening storms.

The train just stopped in Incisa.  Has anyone heard of this town before?

Two girls just got on the train and sat in seats across from me. One of the girls is talking on the phone faster than I have ever heard anyone speak Italian before. It is amazing. I am trying to listen to see if I can understand any of what she is saying. She must be speaking 25 words per second! Ok – got “pero” and “non lo so”. Amazing, I am actually starting to understand a few more words that she is saying.

Well we are close to Firenze now. I will finish this later…

So that was my day fabulous day in Arezzo.

It’s now Sunday evening as I post this. I am heading to Lucca tomorrow morning. The B&B where I am staying advertises wifi so hopefully I will at least be able to do mini-posts using my iPod Touch if computer access is not available.

Off to go catch the end of the USA-Brazil soccer game.

Next up – Saturday evening and Sunday in Florence.