Monday, June 29th:
Monday morning, I had an early breakfast, said goodbye to the people at my B&B in Florence, and took a taxi to the train station.

The train to Lucca was a new modern regional train and it was on time!  Although somewhere along the way. it became behind schedule.  There were not many people taking this train, which was nice because that meant I did not have to worry about storing my luggage.

When we arrived in Lucca, I had to carry my luggage down a few stairs but then was thrilled to find a ramp as an alternative to taking the stairs back up to the exit area. There was a taxi waiting right outside the train station.  The taxi cost €7.

I arrived before my room was ready.  The woman running the B&B gave me a map and pointed out many of the recommended places to visit in Lucca,  including the two towers that can be climbed after I told her of my tower obsession.

Once my room was ready, I unpacked my things and then headed out to find somewhere to eat lunch.  I immediately became lost, but it did not take me that long to figure out my way around using my map.

I had lunch at Ristorante Pizzeria K2.  I ordered a delicious caprese salad and a pizza margherita with peperoni (peppers) added.  I thought about telling the waitress that I was aware that peperoni meant the vegetable – peppers and not the meat, but did not. About a minute after she took my order, she came back to make sure I understood that peperoni meant the vegetable and not the meat.

The caprese salad was the melt in your mouth kind.

The pizza was ok. I am pretty picky when it comes to pizza. 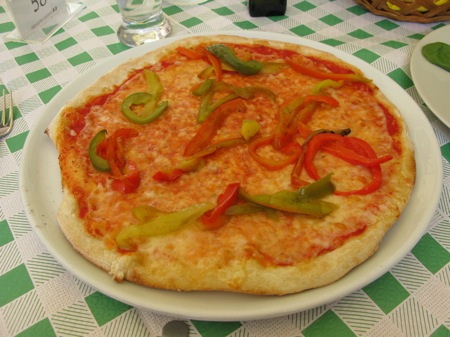 I spent a wonderful afternoon wandering around Lucca. 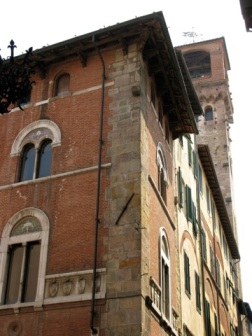 I spent some time inside the beautiful Church of San Michele. Photos inside did not come out that great. Here are a couple of photos outside of the church. 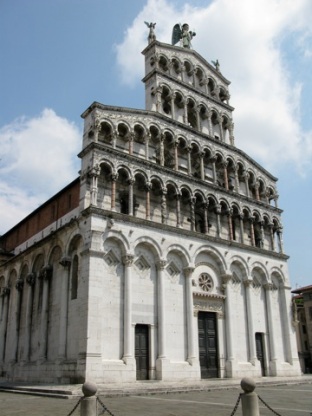 Then, I went to the post office to mail a birthday card. There are only two places in Italy that sometimes make me feel uneasy – the supermarket when at the checkout stand and the post office.

This post office was one of the bigger post offices with seats and numbers. I sat down in one of the seats and asked if I needed a number to buy a stamp. A lady sitting next to me immediately told me yes I needed a number. A second lady jumped out of her chair and took me over to the number machine. It took her a few minutes to figure out which button to push.

Post offices in Italy are quite confusing. All kinds of business is conducted at the post office. I looked at my number and saw that I had quite a wait. I started to write the address on the card. The woman called over to me to tell me to make sure to watch the numbers. She was so kind and helpful and seemed a little concerned that I was not watching the board.

There were four kinds of numbers being called (I am guessing for the four different types of businesses). I just had to pay attention to the numbers that started with P. When I got my number, they were on P166. My number was P175. As each new number went up on the board, a little bell sound would ring. After a while, watching the board and listening to the bell sounds put me in a trance.

About 30 minutes later they were up to P173. While waiting, I noticed that if a number was called and no one immediately went to the window, too bad, the person missed out and another number was called. I got out of my seat and positioned myself near the windows at number P173.

I was relieved to be helped by a very friendly woman. It took me about a minute to buy my stamp and have my card mailed. I probably could have bought the stamp at one of the Tabacchiere shops but I was not sure if it needed to be weighed or if I would need a special stamp since the card was being sent to the US. I have only bought postcards at the Tabacchiere shops in the past.

When I went into the post office it was sunny and warm. When I came out it was overcast and cool. I went back to my B&B to hang out for a while before dinner. I had a lovely chat with one of the owners. I also discovered that my favorite show, Carabinieri, on was on TV.

Before leaving, I made a reservation there for tomorrow night.

All caught up and all done with my iPod Touch.

Tomorrow – the ultimate tower experience … The Leaning Tower of Pisa!!!