Wednesday, July 22nd:
My flight to Newark arrived on time. I called Kim to let her know that I arrived and to arrange a meeting place. As I made my way down to the international arrival area, I noticed huge signs informing everyone that no cell phones and photos were allowed.

I found it strange that the US citizens’ lines at the passport control were on the left when in the past they were always on the right. The wait was minimal. Next stop, the luggage carousel. As always, it seemed to take forever for the luggage to start coming. While we waited the little beagle dog made the rounds a few times sniffing for food items such that need to be declared. Once the luggage carousel started moving, my bag showed up pretty quickly. I always do that little happy dance in my head when I see my bag after having a bag lost or more accurately stolen after departing Rome one year.

I brought back some canned tuna and anchovies for my dad thinking that these food items would not send me through the agriculture line. Wrong.

Just it was my turn to explain my food items marked on my blue slip, my phone rang. I knew it was Kim but could not answer it. It just kept ringing and ringing as I tried to explain to the guy that all of my food items were either candy or canned tuna and anchovies. He told me that I had to go through the agriculture line anyways. I really dislike going through this line after watching the guy put my bag through the x-ray machine one time and then letting it drop 3 feet onto the ground while I was not allowed near my bag. That year I brought back sundried tomatoes.

This year, they were so busy tearing through two other passengers’ bags that they just sent my bags through the x-ray machines. I was able to grab them just as they reached the end. My phone started ringing again. I didn’t dare answer it since I was not officially out of the area yet. I felt bad wondering if Kim was right outside wondering where I was.

After gathering up all of my stuff and hooking it back together, I left the international arrival area and gave Kim a call. I told her where I was and headed outside. Kim called again a few minutes later asking exactly where I was saying that she must have just missed me and would do another loop around. I told her I would wave my arms and jump up and down for her so she could find me. I forgot to ask what color her car was so I stood out in the street waving my arms and jumping up and down as each car approached.

A few minutes later, Kim called again talking about landmarks I was not seeing. I kept telling her that I was by a certain door and she kept talking about signs I was not seeing anywhere. Meanwhile a guy nearby must have overheard me and told me to tell her that I was at Terminal B. Terminal B? All this time Kim thought I was at Terminal C. No wonder why she could not find me. Once this was cleared up, Kim arrived a few minutes later. We laughed about the mix up, but I still felt badly that she wasted all her time driving around. I guess usually Continental planes usually always land at Terminal C and I had no idea that there were even different terminals. That would explain why the US citizens’ lines at the passport control were on the left this time.

I was treated like a queen at Kim’s house. I took a shower and unpacked just a few things as I settled into my huge bedroom with a very comfortable bed and private bathroom when we arrived. Kim and I went to a little store that sold fresh fruits and vegetables and then later to a big grocery store nearby. I am always amazed when wandering through a grocery store on the mainland. Not only are the prices much lower than they are in Hawaii, but there is so much more of a variety of food to choose from. So many things that I wish were sold here in Hawaii.

Kim promised me a lobster dinner a couple of years ago. The guy fishing out the lobsters did a great job finding four superb lobsters for us.

After reading so much about Becky and Sammi, it was wonderful to finally meet both of them for the first time. We hung outside and munched on some appetizers. Chris joined us when he got home from work. Dinner later that evening was fabulous. I would say that it was probably one of the best meals of my trip! I should have taken a photo of the huge spread, but did take a photo of the lobsters. YUM!!! 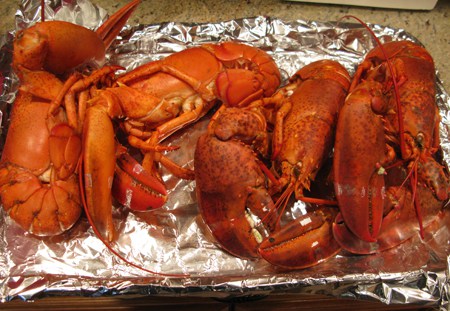 Thursday, July 23rd:
I slept well and awoke to another fabulous spread. Bagels! Oh how I miss good bagels!! Cream cheese with chives, tomato slices, fresh fruit, and pastries. I think I should have booked a week at Kim’s spectacular hotel.

Kim checked me in online and printed out a boarding pass for me and then drove me back to the airport. Thank you again Kim for a wonderful time! You are too kind! I am very lucky to have a friend like you.

At the airport, the crowds outside were huge, all trying to check their bags in with the porters, so I went inside. There I found one of those snake like lines set up. It ended up only being a 5-minute wait, which was not a big deal, although I found the woman running the line to be quite strange. It seems to me that either the military train many of the airport personnel or the personnel aspire to be like the stereotypic military personnel. The woman was barking “Step up people, Step up” and as one of the check-in areas opened up, the woman would bark, “Step up to number ___” and then would bark, “Move along, quickly now”. What exactly does “step up” mean? There were no steps anywhere.

I found her ordering everyone around quite humorous and so when it was my turn, I purposely walked as slowly as possible to my check-in number area just to throw her off. At first I thought she was going to blow a gasket but I think she must have thought I was not able to move quickly and instead smiled at me as if she was willingly moving me along as fast as I could go. My bag gained about 10 pounds since my departure weigh in.

The security line was almost empty. Before taking off your shoes and putting everything through the x-ray machines, you had to show your passport and airplane ticket to the woman sitting behind an official looking desk. Hanging in front of this desk was big poster listing the signs of the H1-N1 Virus. At first I thought perhaps temperatures were being taken but the woman was only checking passports. There was only one family in front of me. I am not sure where they were going but the woman was going through each passport very thoroughly and then asked the little girl if she was happy to be going home. I was next.

When she saw my brand new passport, she was quite interested in the new page. It was as if my passport was one of the first new passports she has seen. She even called another guy over to take a look at my passport and the special markings that can only be seen with the special light she had and even invited me to look at the markings (can’t remember what they even were now).

I passed quickly through the metal detector, gathered up all of my belongings, stopped at Au Bon Pain for a raspberry cream cheese pastry and then stopped at Ciao Bella for a coffee gelato (pretty good gelato for an American company). By this time I was all sugared up and ready to fly.

After taking off, I was surprised to receive a special meal. I forgot that I ordered the Kosher meals since when I booked my flight, it said that special meals were not being served on my flights. I started ordering the Kosher meals after getting one once flying from Newark to Honolulu when my special meal choice was not available. It was so good (yes even for airplane food) that I started ordering Kosher meals. While my seat mates ate horrible regular airline food I dined on excellent airline food. Almost as good as first class food. My seat mates drooled as both of my meals arrived.

The funny thing was that when the girl sitting next to me asked the flight attendant for some sugar for her tea, I told her that she could have my Kosher sugar. I said I didn’t care if I had regular sugar. The flight attendant gasped as if I was going against my religion. I told her I only ordered the Kosher meal because it was good. She gasped again. I then told her my mom was half Jewish so that made me Jewish and that seemed to make things alright. Meanwhile the girl sitting next to me said she was calling her mom who was still in New Jersey to make sure to order Kosher meals on her flight home and the nurse sitting in our row said she was making sure to order Kosher meals also on her flight back. I hated to tell her that the Kosher meals from Honolulu to Newark are not as good but if you are ever flying out of Newark on Continental and you want good food, go Kosher!