Thursday, July 9th:
After a low key day on Wednesday, Thursday was going to be a daytrip day. My plan was to visit Reggio Emilia in the morning and possibly continue on to Parma (about 15 minutes further by train) in the afternoon.

Reggio Emilia is not a very popular tourist stop but it is very famous for its early childhood education. I went to Reggio Emilia without any notes and no set plans. I only brought an old map of the town that I picked up a few years ago at the Informagiovani in Coccaglio where Katia works

Thursday morning, I bought two bus tickets at the nearby tabaccheria and then walked to the bus stop by the church in Piazza Maggiore, an even closer bus stop for the A bus that I discovered while walking around Bologna Wednesday afternoon. I waited only a few minutes before the bus arrived.

I took the bus to the train station, bought a train ticket from one of the automatic ticket machines, and took the 9:30 regional train to Reggio Emilia, arriving at 10:08 (notes I kept/I don’t have that good of a memory).

It is a good thing I had an old map with me of Reggio Emilia because the tourist information office is located in the center of the town. I would never have found the centro, which was about a 10 minute walk, without a map. Even with a map, I had to ask for directions to find the historic center twice.

I had no idea what I would find in Reggio Emilia. The area right by the train station seemed like a mini Chinatown. I say this because most of the signs were written in Chinese. As I walked towards the center, the buildings reminded me somewhat of some of the buildings in Modena. 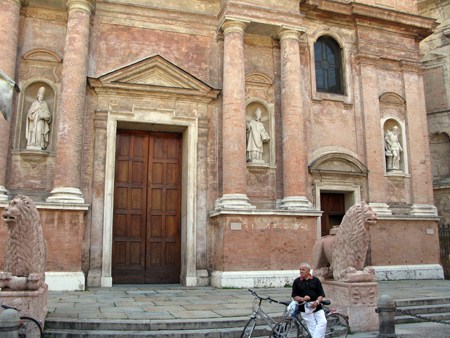 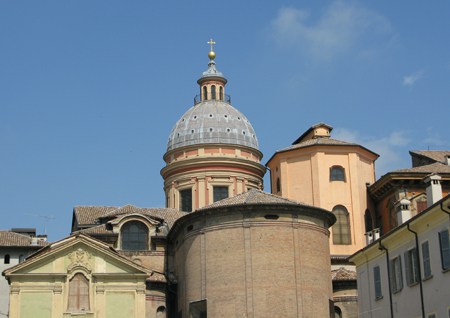 According to my map, the tourist information office was supposed to be located in Piazza Prampolini next to this interesting church.

When I walked into the building where I thought the tourist information office was located, I was told that the office moved to a building just outside of the piazza.

There was also a beautiful clock tower in Piazza Prampolini.

As I walked towards the correct tourist information office, I took this photo looking back towards Piazza Prampolini.

The woman in the tourist information office was very helpful. She gave me a new map and circled a few areas of interest including the Basilica della Ghiara, which she told me I just had to see. She also told me that most of the museums would be closing soon for the day. I stopped in a nearby bar for a caffè macchiato and then walked towards the Basilica della Ghiara.

The tourist information woman was right. It was incredibly beautiful inside and a church not to be missed. Unfortunately no photos were allowed inside. I did find this Wikipedia article (in Italian) where you will find a few photos of the inside of the church if you are interested.

After leaving the church, I headed towards the big park. Just before reaching the park, a very interesting building caught my eye. I first noticed the building because of the medieval doorway.

I became more interested in this building as I looked up and saw the cool tower. No tower climbing though.

It turned out to be the Parmeggiani Art Gallery, and it was free!

This gallery houses an interesting collection of items including Italian, Spanish and Flemish paintings, European costumes from the XVII to the XIX century, furniture, sculptures, jewels, cutlery, arms and other artistic objects all crammed into a few rooms. I was only able to take one photo inside before I was told that no photos were allowed. 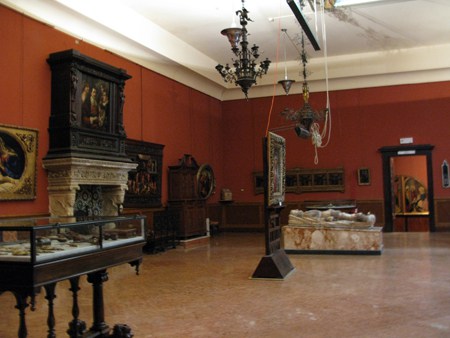 Next to the park is the huge Piazza della Vittoria. I loved this piazza! I posted a few photos of this piazza with the teatro and the large rectangular area where water spout fountains change not only height but also shape in last Saturday’s PhotoHunt post. The two little children I photographed would run towards the water spouts each time they were low and then run away whenever the water started to rise (almost like how kids run towards the water at the beach and then run away when the waves come in). They were so delightful to watch.

This interesting sculpture is also located in Piazza della Vittoria.

I found some shops at the other end of the piazza. I wasn’t sure just where I was on the map at this point but I did a little window shopping… 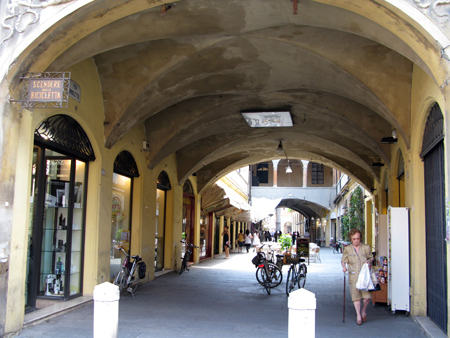 Since I was so close to the tourist information office again, I stopped in and asked the woman where the famous Reggio Emilio schools were located. I realized that they were closed for the summer but thought it might be interesting to see where they were located. She told me about schools located in two locations, one a little complicated to find and the other in the park I just visited.

Now that I knew the quick route to the park, I walked back to check out the school. The school was hidden well, surrounded by a fence with vines covering the fence. From what I could see, the play area looked pretty cool with wooden structures and some sort of tunnel. I am not sure though if this school was one of the famous Reggio Emilia schools.

The location of the other school seemed too complicated to find during my short visit. I would have made the effort if I had the chance to visit the school but since it was closed in the summer and I was not sure how much I would have been able to see from the outside, I didn’t try to find it.

Next up…. onward to Parma!