Friday, July 10th:
I woke up to chilly weather with clouds moving in. After eating breakfast at my hotel, I headed out to enjoy my last day in Bologna (prepared this time with my raincoat).

First stop was a visit to the Museo Civico Archeologico di Bologna.

Next, I stopped at Caffe Zanarini for a caffe macchiato and hung out in the delightful Piazza Galvani gazing at the Luigi Galvani statue and the frog. During the tour of Bologna that I took earlier in the week, I learned an interesting fact about this statue. Luigi Galvani is not looking at an ordinary book, but a book with a frog, which represents his study of frogs. I remember spending time in this piazza last year and even though I admired the statue and took a few photos, I never noticed the frog!

Then, I headed over to the food market area and hung out at the fish market for a while (see my fish market photos here).

I was starting to feel my last day blues, not wanting to leave Bologna so soon. There were so many choices but I was having a difficult time deciding what to do for the rest of the day. My original plan was to climb the Torre degli Asinelli but I was only going to climb it if the skies were clear to enjoy the view since I have climbed this tower before.

I also was beginning to think about lunch. I enjoyed my farro salad so much the night before that I thought about returning to Divinis but was waiting to hear from a friend of Katia’s that I had dinner with earlier in the week. We talked about having lunch together.

While I thought about what to do with my last day, the sun started to peek out from behind the clouds and it started to warm up a bit. Yay!! Sunny weather after all. I went back to my hotel to change and then walked over towards the Torre degli Asinelli.

On the way, I checked out the strange artwork (in my opinion) that was attached to a couple of the towers in Bologna as an outside summer art exhibit.

(The photo above was taken on Saturday)

I could feel the excitement as I purchased my ticket (3 euros) to climb the Torre degli Asinelli. I must have been in great shape because it really was a pretty easy climb for me this time. I remember huffing and puffing the entire way up the last time I climbed this tower. This time there was a cool breeze which certainly helped. 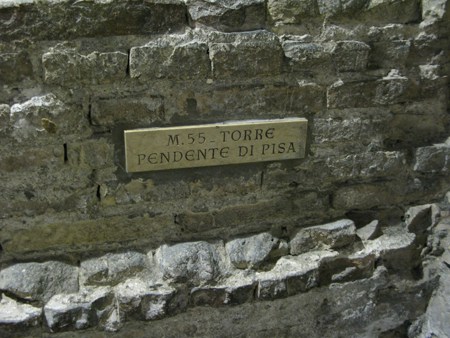 The first time I climbed this tower, I did not know Bologna very well. I am really glad I climbed the tower again. It was fun to be back up at the top again looking at a much more familiar Bologna this time.

Here’s a shot looking down…

By the time I reached the bottom of the tower, I was very hungry. I had not heard from my friend and I thought it might be too late to have lunch at Divinis. I walked by il Banco del Pane and saw some delicious looking spinach quiche in the window. Sold!

I spent time in both the regular Feltrinelli’s and the International Feltrinelli’s. I ended up buying a new Italian Grammar book to add to my collection.

While at the top of the tower, I noticed two landmarks (a church and an interesting building) that I did not recognize. The church was not far from Feltrinelli’s. It was in the University area. It ended up being closed but I found the area to be very interesting.

I was still curious about that interesting building I remembered seeing while at the top of the tower. It stood out because it was white and looked very out of place for a building in Bologna. I can’t remember the significance of the building now.

Here is a photo from the top of the tower:

and a photo close up:

The skies became dark and the temperature dropped. I made it back to my hotel just as it started to rain. I hung out in my hotel for the rest of the afternoon.

The one night I decided to have dinner about a 10 minute walk from my hotel (with a portion of the walk not covered by the famous Bologna porticos) and it was raining outside! That was ok though. I was meeting Jane, Casey, & Ken (from Slow Travel) for dinner at Osteria al 15, where I experienced a wonderful dinner last year.

Dinner ended up being a lot of fun! I really enjoyed meeting Jane, Casey, & Ken. The owner (I think he is the owner – he was the person that waited on me last year) was very impressed with Casey’s Italian. So was I!

I ordered the same thing I did last year – ricotta all’ aceto balsamico caramellato (ricotta cheese with a sweet carmelized vinegar drizzled on top) and tortelloni con burro e salvia (a type of ravioli cooked in butter and sage). Yum!! The owner even brought us an extra antipasto on the house. I asked Casey to teach me how to say “I ate so much that I will have to roll home.”, something I have been wanting to say after every meal. The translation he taught me was: “Ho mangiato cosi tanto che devo rottollare a casa.” I tried it out on the owner. He thought it was quite funny.

After saying goodbye, I walked back to my hotel. It was too cold to check out the Friday night movie in the piazza. Earlier in the evening many of the chairs overturned from the wind.

My last night view of the statue of Neptune: 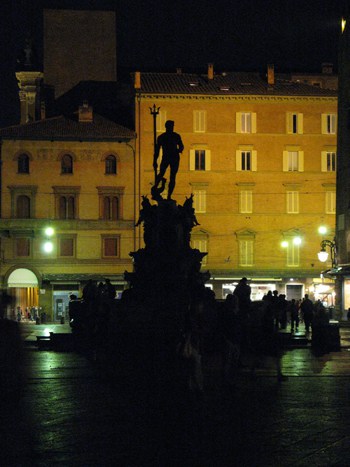 Next up – Saturday ~ leaving Bologna & traveling to Stresa