Sunday, July 12th:
My hotel was nice and quiet when I awoke Sunday morning. Here is one of the first views of the morning from my balcony. It looked like it might rain but I soon learned that the first view of the morning did not always predict the weather in Stresa. It ended up being a beautiful and warm sunny day.

Despite the fact that the hotel was nice and quiet early in the morning, I can’t say the same about the night before. Although no loud noises came from other hotel guests or from people nearby, it was a bit noisy as cars drove by the main road below the hotel. There was also the occasional train rumbling by. I knew that the hotel was near the train tracks but was surprised to hear the noise of trains Saturday evening since the train strike started at 9pm. I am guessing most of the trains were freight trains and perhaps a few might have been trains coming from Switzerland.

Breakfast at my hotel was very good. Of the four places I stayed this summer, B&B La Romea still wins as top breakfast spot with the B&B in Florence coming in as a close second. I would rank this hotel as third of the four. There was a better choice of cheese, pastries, breads than at Hotel Orologio and there was even individual cups of flan. Both hotels had a good juice selection though.

After eating breakfast, I sat outside my hotel by a peaceful garden for a while catching up on things using the free hotel wifi connection. The hotel does provide a computer for use in the room next to the lobby but there were some keys that seemed to stick and it got frustrating fast.

The wifi set up however was a bit frustrating. Every time I turned my iPod Touch on, I had to type in this long username and password. If I went up to my room where there was no wifi access and then went back down to the garden area to check one more thing, I had to type in the username and password again. This did not happen at other places that required a username and password during my trip so I think it was the way the wifi access was set up at this hotel. I am not sure if people staying in the main hotel building had wifi access in their rooms although I was not able to connect while eating in the breakfast room. Even so, I was happy to have a wifi connection. Yes, I am an internet addict!

About 10 am, I headed down to the tourist information office to check on a few things and then bought a ticket for the boat to visit both Isola Pescatori (Superiore) & Isola Bella.

The large crowd waiting at the dock brought back memories of my stay in Sirmione trying to get onto a boat. I did notice that the crowds in Stresa were much more polite with a lot less pushing and shoving going on. The boat crew was also very nice and didn’t mind if people stood near the sides of the boat to take photos.

Views of Isola Pescatori by boat: 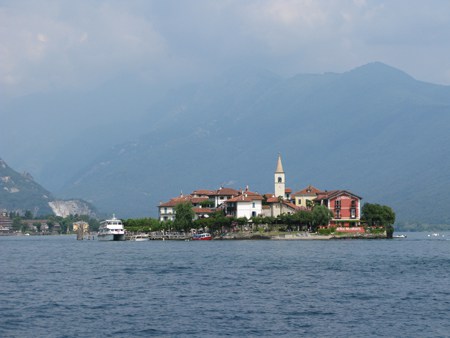 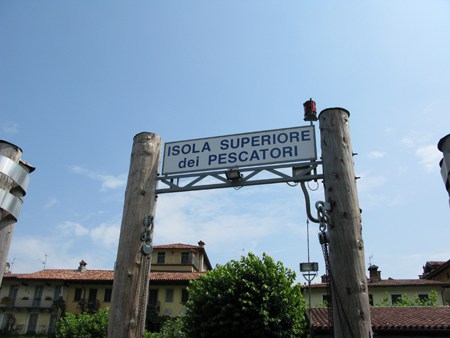 Although Isola Pescatori was full of tourists, it was easy to get away from the crowds. I took this photo while on the opposite side of the island from where the boat stops. 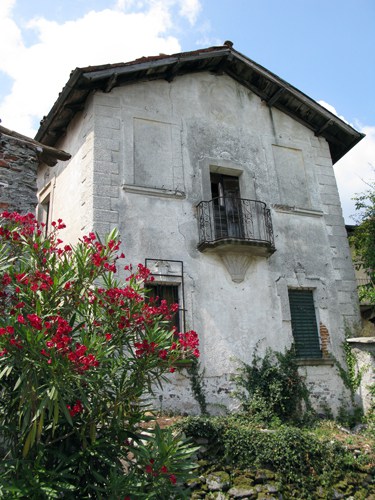 After walking a bit, I found the perfect spot to sit and enjoy the warm sun and beautiful views of Isola Bella. I hung out there for a while until my stomach started to grumble.

I wasn’t sure just where to have lunch. I checked out a few places and finally decided on La Malghera because it was a smaller restaurant and it was not as crowded as many of the other restaurants on the island. I was initially seated at a table in a middle area but noticed right away that a couple sitting by the wall was getting up to leave. I asked my waitress, who kept speaking to me in French for some reason, if I could switch tables. I ended up sitting right where the white arrow is pointing in the photo below. I drew that arrow to show where I sat, it was not part of the restaurant design :)

I had no idea what my waitress was saying as she continued to speak to me in French. I asked her if she could speak to me in either Italian or English. She did switch to Italian but had a very strong accent. Fortunately I could read the menu and ordered a seafood pasta dish.

My food looks better than it was. The views however of Isola Bella and the quiet peaceful setting were wonderful!

The view from my table.

3 boys hanging out on a boat dock playing guitar with Isola Bella in the background:

View of the end of Isola Pescatori farthest away from Isola Bella: 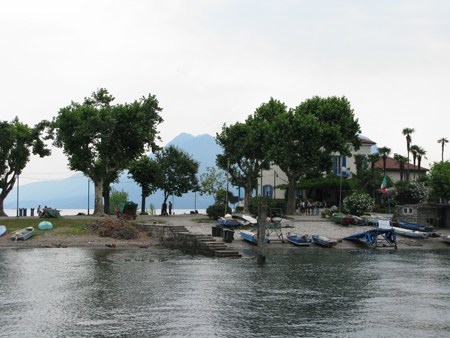 Next up – onward to Isola Bella