Sunday morning, after climbing the Giotto’s Bell Tower (in Florence, Italy), I heard band music playing nearby. The band turned out to be the Rossa Italiana Corpa Militare Band. They were closing out the Calcio Storico event that took place a few days earlier in the week. After watching the band play for a few minutes, it started to march. Everyone followed the band. It was really alot of fun. The band marched around the block from the Piazza della Repubblica towards the Duomo and then back to the Piazza della Repubblica.

Somehow, I ended right up in the front and was able to video the band marching. Here’s a little video clip I took. Towards the end of the clip, check out the cute kid and his mother’s expression as she realizes that I am taking video of him marching along with the band.

When the band returned to the Piazza della Repubblica, it started to play again. 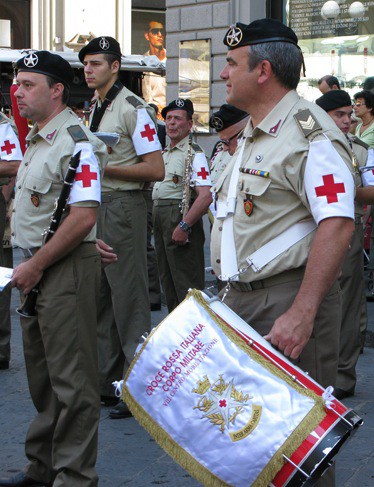 Here are a two short videos (combines) of the band.

After a few songs, I headed back to my B&B. A little while later, I was surprised to hear the band playing again! Now they were playing in Piazza della Signoria. I went to watch them play and this time I was able to maneuver my way up to the front of the crowd.

The last song they played Fratelli d’Italia (the Italian National Anthem) . I recorded all of it except for the first few seconds on video. It was a chicken skin moment as many in the crowd sang along!

After the band finished playing, the person leading the band went over to salute a few military officers and the new mayor (in the blue suit on the left).

Then the band marched off and packed up their instruments.

Here’s a link to my full post on Sunday in Firenze (this post starts on Sat eve).