When I returned to my hotel room Friday night, I was so cold that I turned the heat up to 80 (as high as it would go) and got into my flannel pj’s. I woke up in the middle of the night from the heat! Five minutes of the sliding glass door being opened as well as lowering the heat solved the problem. This ended up being a nightly problem (although I learned not to dress so warmly and did not put the heat up as high).

Saturday morning, the weather was a bit overcast and seemed even colder than Friday. A bunch of us planned to go to Little Italy. We met in the lobby and arranged rides. Some of us went in a taxi type van and others went in cars.

My first objective was good coffee. We all decided to meet up at Caffe Italia. The espresso was yummy. I was tempted to order some cheesecake but it was going to be too difficult to eat standing up (not enough room for everyone to sit) so instead I got a muffin. I also bought a few bagels for breakfast for the next two mornings. Although it was not fun lugging them around (my pack was already full of extra warm clothes) the bagels ended up being a great idea since the food was horrible on the plane. I enjoyed one Sunday morning, one at the airport Monday morning, and another one on the plane.

The Little Italy Mercato takes place every Saturday. As we walked up and down the streets looking at all of the various items for sale (food, clothing, kitchen stuff, etc) I had a great time chatting with everyone. As you can see, it was very crowded at the market.

Six of us took advantage of the buy five get one free offer for a garlic plate grater that also came with a garlic roller tube and brush. When I got home, I realized I already have a similar type dish in the shape of a white fish on my stove! At least now I have the directions as well as the roller tube and brush. The one I just bought is much prettier though (colors that match my kitchen). I would have loved to buy some of the food being sold, but it would not have worked out traveling back to Hawaii. I did buy a delicious orange that I also enjoyed Monday morning at the airport.

After about an hour and a half, we started to talk about lunch. Here’s a group shot of part of the group who went to Little Italy on Saturday before we all gathered back together to formally discuss lunch options.

We checked out a few places for lunch. A bunch of us decided to go inexpensive and ended up eating at a pizzeria. I can’t remember the name of the place now. It had a nice outdoor patio area out back where we sat and ate our pizza. I thought the pizza was pretty good but not as good as the pizza in Italy.

After lunch, some of us decided to walk to the Gaslamp Quarter. Most of us were not too impressed when we arrived. It seemed to basically be a bunch of stores like an outdoor mall and most of the stores were the same stores we have here in Hawaii. I would have been thrilled if there was a Trader Joe’s there but Trader Joe’s was located in a different location in San Diego. I think the Gaslamp Quarter may be an area that is more interesting as a place to visit in the evening.

At that point, five of us decided to head back to the hotel. The cab would only take three max, so we took two cabs back. Our next formal event (when I say formal, I mean an event that everyone would be attending/not formal attire) was in the evening.

I had some time before dinner, so I walked across the street to take a few photos of the bay. I posted the boat photos previously.

**Warning Sandra – bird photos coming up – scroll quickly on down past the next three photos.

There was a little pier where people were hanging out fishing. I thought it would be a great place to take some photos until I noticed all of the birds flying by dropping bombers all over the place. I did not stay too long. 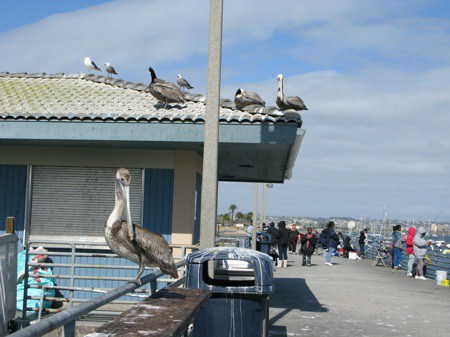 (Do you see all the people in jackets and hoods? I was not the only one who was cold.)

After leaving the pier, I spotted this cool seagull. Loved the little red mark on the beak. 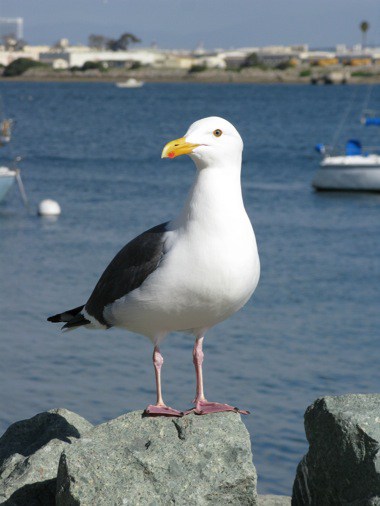 I then ran into Barb & Mike who were sitting on a park bench. We chatted for a while and then they headed back to their room to get ready for dinner. I would have liked to have walked a little further down towards some of the sculptures by the bay, but it was getting really cold out so I also headed back to my room.

Saturday evening was a Mexican food fiesta event. I am not a big fan of Mexican food but read during the planning stages that this was not going to be your every day Taco Bell type of Mexican dinner. The food was indeed fantastic! It was a very fun evening. There were red beads with chili peppers handed out to everyone, lots of laughter, and even a person reading palms and a tarot card reader. I did not participate in the fortune telling though.

There was also a band that played later on in the evening along with dancing.

Before the evening ended, Brad handed out some awards (olive oil from Nico, flowers, and a crown for Pauline). I am borrowing this photo from the 2010 2nd Great Slow Travel Gathering Slow Travel Mexican Fiesta album.