I just could not get motivated about the PhotoHunt theme (standing) this week. Instead, I would like to share my Italy plans. YES :) I am heading back to Italy this summer!!!!

To get into the spirit, first I would like to share a few Italian flag photos I took during the same afternoon and evening as my previous post. 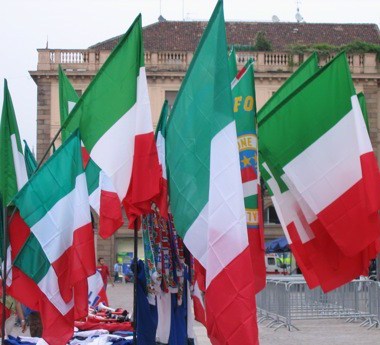 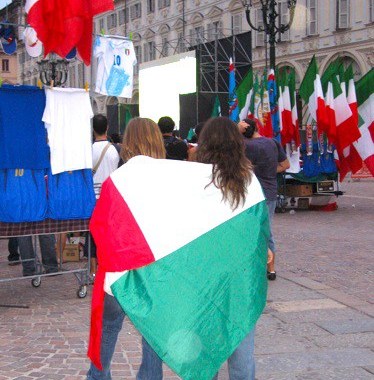 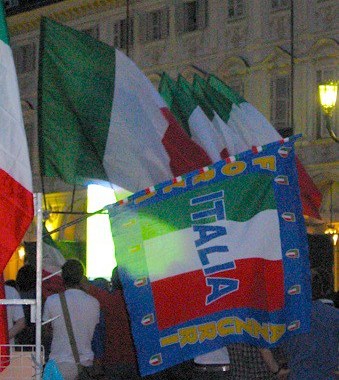 Now about my trip…

I will be flying in and out of Malpensa Airport. I don’t have the first four nights of my itinerary set yet but will either spend this time with my friends in Coccaglio or possibly spend the time in Verona or Parma or who knows? There are tons of possibilities.

My next stop will be 6 nights in Venice staying at a cool little B&B that my blogging friend Annie discovered.

I have been to Venice four times so far. I didn’t like Venice during my first visit. In Venice’s defense, I did the two night rush around and try to see as many things as possible type of stay. Two years later, I booked a hotel in Venezia Mestre my last night in Italy and spent the afternoon/evening in Venice and I liked it. Five years later, I returned to Venice again. This time, I fell in love with Venice. I returned again following year for a week and loved every minute of my stay. This will be my fifth time in Venice and as a bonus, my blogging friend Sandra will also be staying at the same B&B for 4 of the 6 nights of my stay!

My final destination, well final before the boring last night at the airport hotel stay, will be 10 nights in an apartment very close to Piazza Maggiore in Bologna.

Those of you who read my blog regularly know how much I love Bologna. This will also be my fifth stay in Bologna. During this trip, I will not only enjoy more time in this wonderful city, but I will also be taking Italian lessons for a week with Andrea of Bolognalingua. My blogging friend Palma spent three weeks last summer studying with Andrea. I read her blog every day while she was in Bologna and dreamed of doing the same thing one day. At first it didn’t look like it was going to work out because he was booked during the time period I planned to be in Italy but then the person reserving one of the weeks that worked for me had his dates mixed up and the week opened up! What luck!!

I have not formally studied Italian for many years now and my Italian has suffered because of this. I will definitely be doing some cramming before leaving for Italy this summer. I planned my itinerary so that I would have some time to shake out some of the cobwebs and become a little more comfortable speaking before my lessons begin. I am hoping that after a week of intensive Italian language lessons, I will then be able to use my improved Italian during the last few days of my trip while I hang out in Bologna and/or take a few day trips.

I tailored this trip so that I would only have to travel by train with my luggage on four occasions. Also, most of my train travel will be direct, meaning I won’t have to lug my bags up and down stairs at lightening speed to catch connecting trains and I purposefully made my last stop in Bologna so I could take advantage of the new direct train from Bologna to Malpensa Airport.

Just for fun, I made a word cloud of this post: 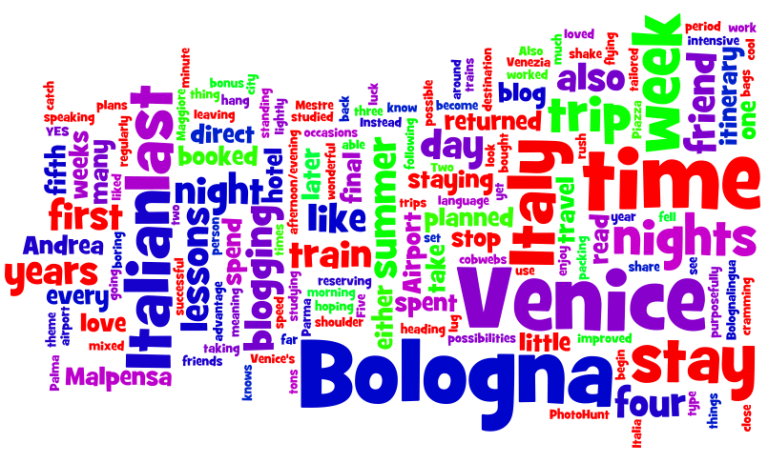 9 thoughts on “bought my ticket for Italia this morning!”