Monday June 6th:
Monday morning, sweet Katia drove me to Brescia so I would not have to change trains (taking the train from Rovato to Brescia and then changing to the Brescia/Venezia train). I bought a ticket for the FrecciaBianca high speed train to Venice from Brescia before leaving Hawaii on the internet. Very easy to do.

When we arrived at the train station, I was still a bit concerned about the train strike. We went to the little information office to check just to be sure. Just as we were about to ask the very nice man about the strike, in stormed two tourists who did not speak any Italian. They were upset that the train they took did not stop in Peschiera Del Garda. Instead it zoomed past and stopped in Brescia. Supposedly someone told them to buy the ticket they bought for the train they took.

Katia interpreted the problem and the train information guy told them they would have to purchase another ticket costing only 1 euro. They kept saying it was not fair. The train guy told them they could try to get on the train and explain the situation but they would be risking having to pay a big fine. I even told them, just buy the new ticket. They kept saying over and over it was not fair. Well, if they read the train schedule, they would have seen that the train they took did not stop in Peschiera Del Garda. Finally after about 15 minutes, they left. Good thing we were early!

The train guy was so grateful for our help that after assuring me that my train would not be affected by the strike, I could contact him if I had any problems. Of course if my train stopped at the next station after crossing into the Veneto region, I don’t think he would be much help, but he was very nice just the same.

It was so hard to say goodbye to Katia when my train arrived. Hopefully I will see her again soon. The FrecciaBianca train was very nice. There was a lot of room between the seats for luggage, even for bags much bigger than mine. I sat quietly across from a Italian business guy. At one point, he started searching for something. Eventually he asked me if I had seen an iPhone anywhere. I offered to call his phone to see if we could hear it. He said he was going to go and find the train guy. I think he might have thought I stole it! He returned about 10 minutes later and the train guy called his phone. Now I could have done that! I heard it ring (it was on vibrate). It fell between the seat.

No strike. No other excitement. That pretty much wraps up my train ride from Brescia to Venice.

When I arrived in Venice, I headed straight for the Venice Connected vaporetto ticket machine to pick up my 7-day pass. It was very easy to retrieve my pass, but took me a few extra minutes to figure out how to validate it. They have these very cool machines where you just put your ticket in front of the machine, it scans it, beeps, and tells you what type of ticket you have and possibly also when it expires.

I scanned it about 5 or 6 times before I was satisfied that it was activated. I am used to stamping my ticket and wanted to make sure it was validated. As I headed for my vaporetto, I noticed that one of my wheels would not move. A thick black plastic tie got caught up in my wheel. I could not get it out so I dragged my bag along.

I was lucky to catch a vaporetto that was not packed, making it easier to maneuver my bags once on board. I easily found my B&B after getting off at the Ca’ Rezzonico stop.

Carlo greeted me and then told me that my room would not be ready until 2 pm. The skies were very dark outside. He game me a map and I headed out to grab a bite to eat. I did not want to go far since it looked like it was about to pour any minute.

I walked to nearby Campo Santa Margherita since that is the only place I was familiar with nearby. I saw a few places open with outdoor seating. I continued on to the end of the campo where I found a little bar that had piadine (flat bread sandwiches). I ordered a melenzane, zucchini, mozzarella piadina.

I found a seat at a little bar on the side and read the paper while waiting for my piadina to be made. Just as she brought me piadina, the skies opened up and it started pouring. A few minutes later, the tiny street outside the bar looked like a rushing river. At one point when the rain slowed, one of the other workers, or perhaps the owner, took out his broom and started sweeping the rain in the street.

Once the rain stopped, I headed back outside, wandered a bit and somehow ended up at the San Tomà vaporetto stop. I hopped on the vaporetto and it started to pour again! My stop was one stop away. My B&B was only a two minute walk, but still I was soaked by the time I reached the B&B. Carlo had already had my bags brought up to my room. I unpacked and showered.

The rain finally stopped so I headed back out. First stop – Piazza San Marco 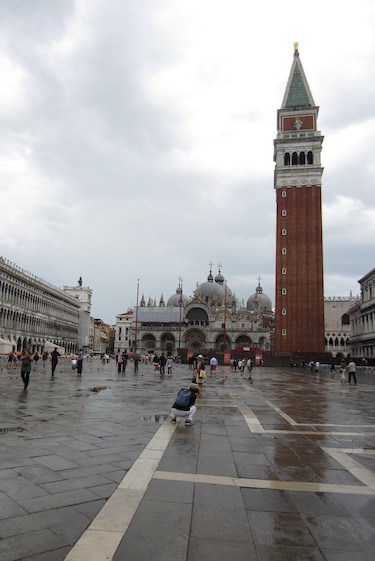 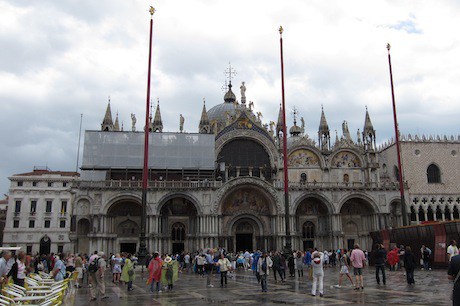 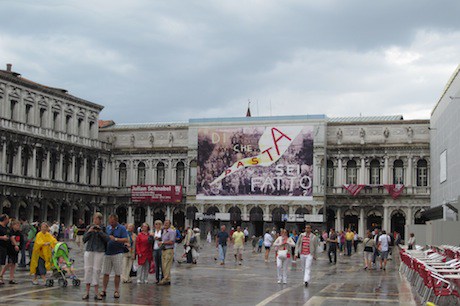 It was getting colder and I had a reservtion at La Zucca for dinner soon so I got back on the vaporetto to return to my B&B to put on some extra clothes for dinner. Here are some photos I took during the vaporetto ride back to my B&B. 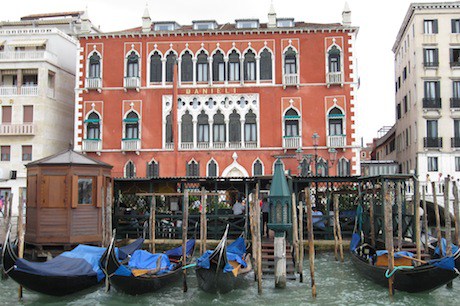 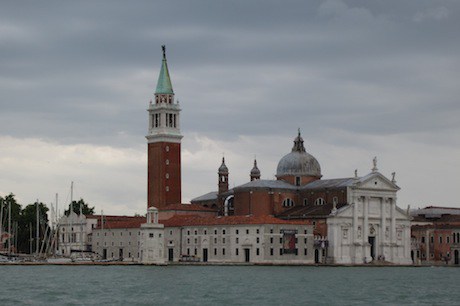 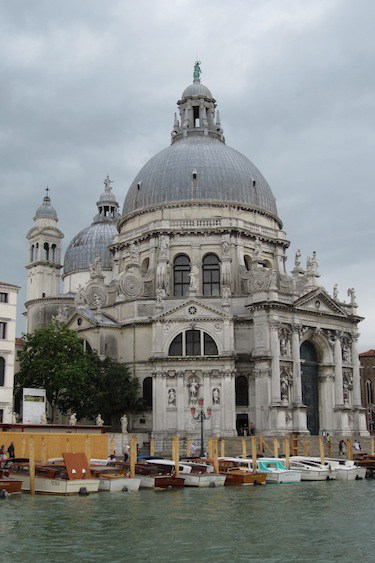 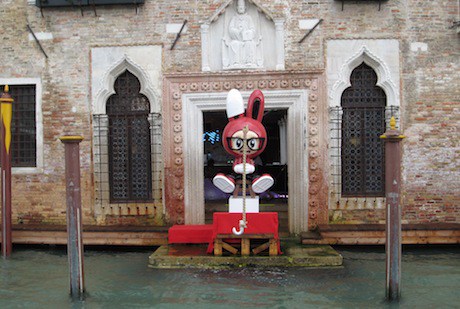 AND here are some photos I took during the vaparetto heading to the restaurant. 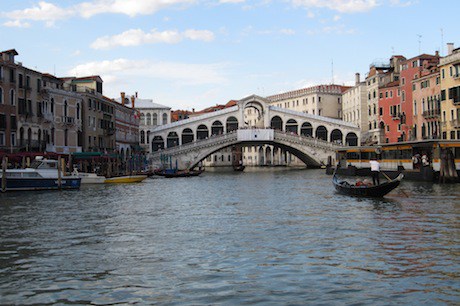 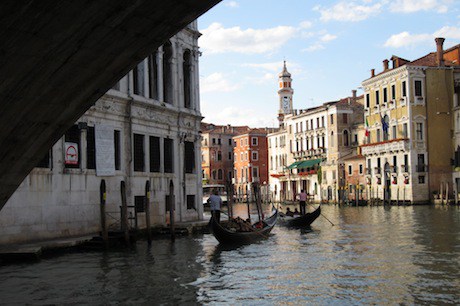 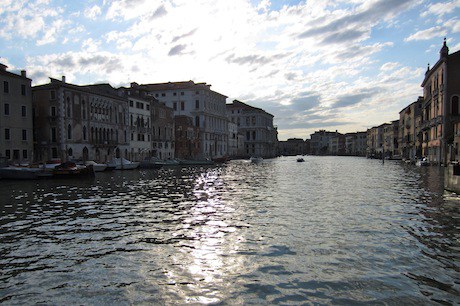 I had a fabulous dinner at La Zucca ~ homemade tagliatelle pasta with fresh ricotta and cherry tomatoes and panna cotta for dessert. The menu offered the panna cotta with chocolate sauce. I asked the waiter (think he is also the owner) if I could have it plain since I can’t eat chocolate (migraines). He asked me if I would like it with fresh stawberry slices instead. WOW! Lucky me! I absolutely LOVE strawberries! …and it was very good.

I was pretty tired after dinner and it was COLD outside (or at least for me). I headed back to my B&B by vaporetto. Here are a few photos I took during the ride back. 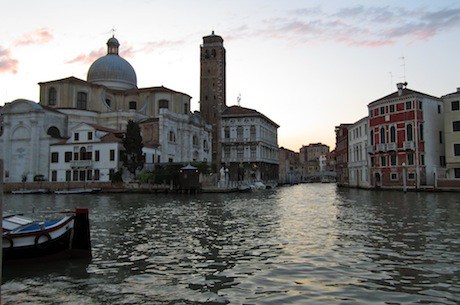 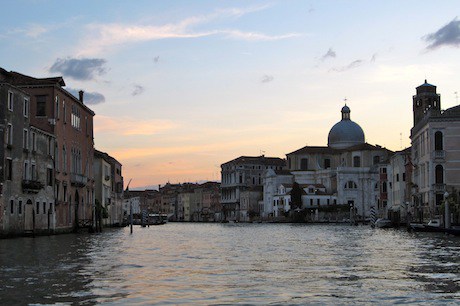 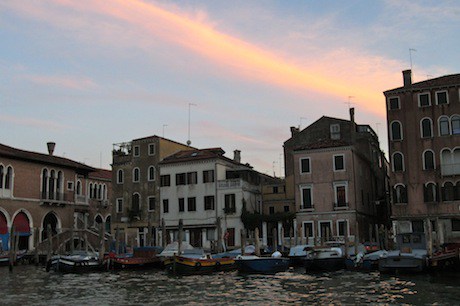 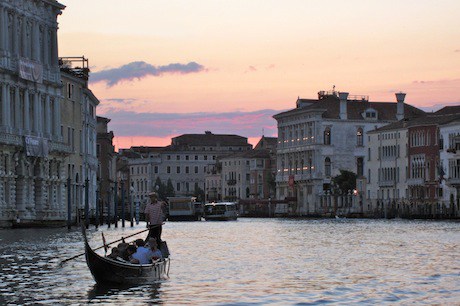 It was so nice be back in Venice again!

Next up – Tuesday in Venezia