Tuesday June 7th:
I woke up to gray skies Tuesday morning, put on some warm clothes, and went down for breakfast. I sat down for a moment and thn told Wenyu, the other person running B&B Fujiyama, that I would be right back. I went back up to my room to put on more warm clothes, adding my fleece, my purple pashmina scarf, as well as some long underwear under my pants. Now I was ready for breakfast. Wenyu was very amused.

Every morning for breakfast, I was served a brioche, two warm bread rolls, and either a little cake or pastry of some sort. I was also offered both coffee and tea and usually had a caffè macchiato and then some wonderful Jasmine tea.

I had no plans for the day. I was tempted to just stay inside until the sun came out, but according to the weather I might be waiting a few days. As you all probably know by now, I don’t do well in cold weather and am not a big fan of rain. But I was in Venice, so after about an hour when it warmed up a bit, I sucked it up, packed three maps and two raincoats, and headed outside.

I got as far as the Chiesa di San Sebastiano before it started to rain. I had a lovely chat with the woman selling tickets inside the church. I had not thought about whether or not I wanted to purchase the Chorus Pass (10 euros for entrance to 16 churches in a one year period). After listening to her explain the benefits of the pass and thinking about the rainy weather outside, I figured that a day of visiting a few churches would probably be a good choice. The woman also gave me some information about the Chiesa di San Sebastiano and apologized because parts of the church were covered due to the current restoration. Many of the ceiling pieces were also missing. Someday I would like to return to this church once the restoration is completed.

Outside, it was raining and blustery. I did not have much of a plan for the day. I started to think about lunch. I checked my map and then headed out, walking towards what I hoped was the Fondamenta delle Zattere to find a place to eat. It was a short walk but still I was soaked by the time I made it to the few little restaurants I saw by the waterfront. I did not do my homework and had no idea where to eat. I chose Ristorante Terrazza Casin dei Nobili. The woman seating me was very kind as I took off my plastic see through rain jacket that I was wearing over my other rain jacket so that I would be able to keep my camera dry. I wasn’t sure if she would be upset that I was getting everything all wet, but instead she helped me hang my plastic jacket on the chair across from me as she seated me.

I ordered bruschetta and spaghetti with clams. The food was ok but the view was fabulous!

After leaving the restaurant, I hopped on the vaporetto and headed over to the Church of the Redentore (a Chorus Pass church) on Guidecca island. I took photos of this church from many angles throughout the day. It is such a beautiful church.

The photo below was one of my favorites, showing the weather of the day. It almost looked to me like there was snow on the church. 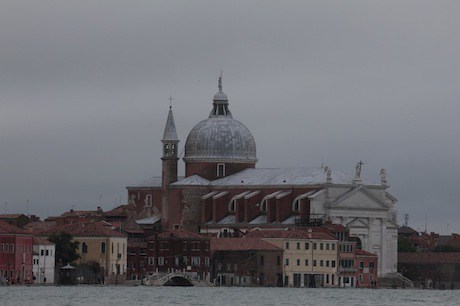 I took these photos from the steps of the church of the Redentore. 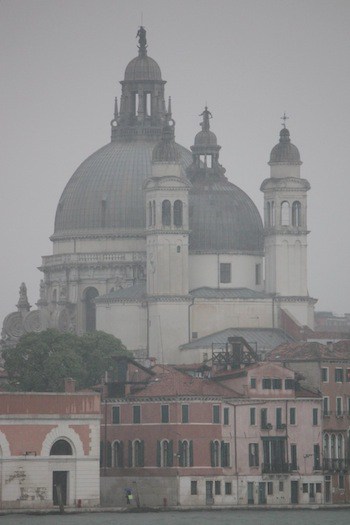 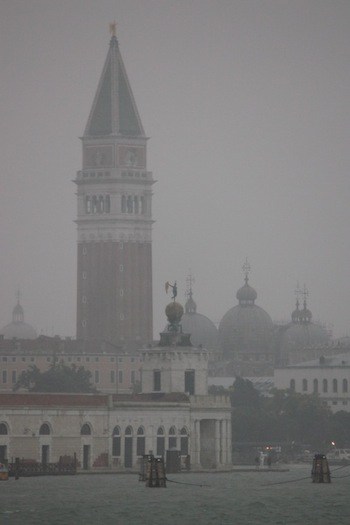 I had never been to the Guidecca island before so I decided to walk a bit. I took these photos along the way. 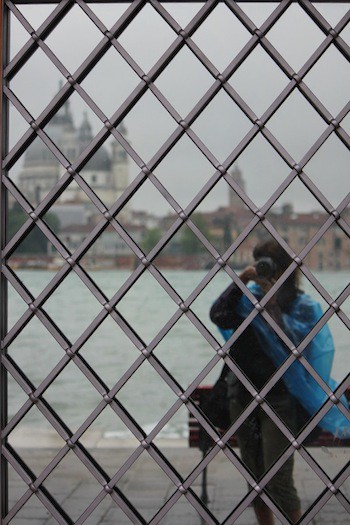 As I was walking, I saw a sign saying Modernikon. I thought it was an exhibit of Nikon photos and so I went inside. During the Biennale taking place in Venice while I was there, there were exhibits all over Venice; some for free, and others with an admission fee. I went inside to check it out. I found out that it was a free exhibit of contemporary art from Russia. I really enjoyed a few of the exhibits.

There were photographs, sculptures, drawings, some strange light show art displays, and in interesting video. The video was of a group of people all different sizes and ages. Each person stood on a stool of a different size so that they would all end up being the same height. They all stood on these stools on the sidewalk of a busy street in Russia during a light snowfall for quite some time. It was a very simple concept showing how even though in Russia, they have been made to all conform and be the same, they are still all unique. I hope someday the video will be available on YouTube. It was really interesting. I am glad I mistook the sign for a Nikon exhibit. Otherwise, I might not have stopped in.

After leaving the exhibit, it did not look like I would be able to walk much further, so I returned to the Redentore vaporetto stop and continued on to the beautiful island of San Giorgio Maggiore. I am going to do a separate post for this part of my day…

My visit to San Giorgio Maggiore

This is a photo looking toward the island of San Giorgio Maggiore.

After spending time on the island of San Giorgio Maggiore, I took the vaporetto heading back the same way I came to see more of the Guidecca island and visit the Santa Maria del Rosario, also known as the Chiesa dei Gesuati and to confuse you further is commonly known as “I Gesuati”, near both the Zattare vaporetto stop and the restaurant where I ate lunch. This was also a Chorus Pass church.
After visiting the church, I was ready to head back to my B&B. Because it was raining again, I got back onto the vaporetto. I thought it would be drier to take the vaporetto around the back way towards Piazzale Roma and on to the vaporetto stop near my B&B instead of trying to find my way back in the rain from the Fondamenta Zattere. As the vaporetto headed towards Piazzale Roma, I saw the Billa (grocery store) and stopped there to pick up a few things.

Below are more photos I took heading first to the island of San Giorgio Maggiore and then back until I reached the Billa store. 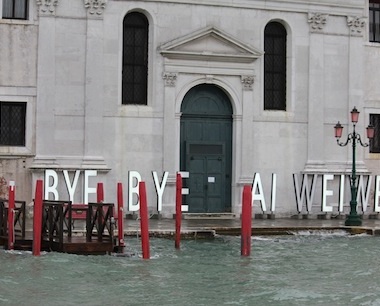 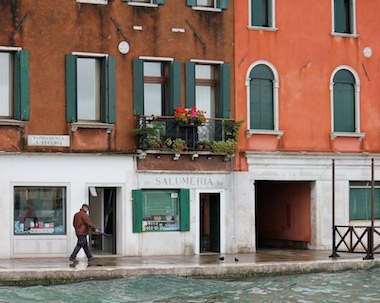 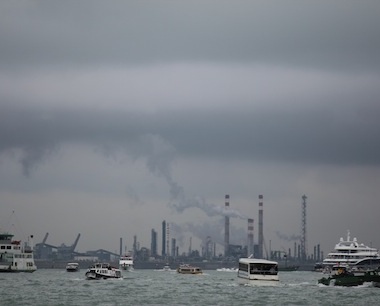 Next up – More of Tuesday in Venezia