It has been almost a year since I have written about baseball on this blog, and what a year it has been! So much has changed since last year’s nightmare season. We have a great new manager, John Farrell, who has been great and the team is FUN!

The magic number for the Red Sox is 12! October baseball is looking more and more like a reality this year!

The team this year is made up of a bunch of crazy guys with beards. Big Papi is still hitting bombs as are a few other players. Eight home runs were hit last Wednesday in a 20-4 rout over the Detroit Tigers, a really good team. The Red Sox just missed out on a sweep of the Yankees today, but even when they lose, I still love this team! They never give up. They play hard and genuinely root for each other. We have a new guy named Xander, a local guy, The Flyin’ Hawaiian, Shane Victorino, and a new closer who has been so positive and also lights out – “high five” Koji Uehara. 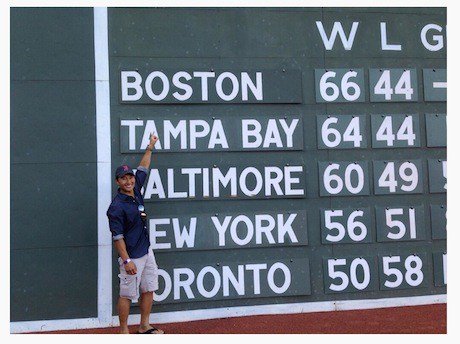 I am very grateful for this year’s Red Sox team. It has brought me a lot of joy!

…Oh and in fantasy baseball, I clinched a playoff spot but it will take a miracle for my team to win this year. I think my guys peaked a little early and are now all slumping… but you never know! Playoffs start next week. Never say never…