The train back from Trieste to Udine was one of the newer trains, which even had a bike rack. It was a pretty cool train as far as regional trains go in Italy.

After arriving in Udine, I went to check out the bus signs in front of the train station, looking for bus information for Aquileia. I couldn’t find any info anywhere so I decided to just catch a bus back to Piazza Garibaldi (close to my hotel) and figure out the bus stuff later. This was the first time taking a bus back to my hotel from the train station. There are a few buses that stop at Piazza Garibaldi. I can’t remember the number bus I got on, but I am pretty sure it was the same number bus I took in the morning. I realized pretty quickly that the bus I was on was not heading towards my hotel, but instead heading in a direction away from the centro. I thought perhaps this particular bus stopped at a couple of other stops farther from my hotel before turning towards Piazza Garibaldi. NOPE!

The bus continued to travel farther and farther away. At one point, I went up to ask the bus driver if the bus would be stopping at Piazza Garibaldi and found out that I got on the bus that went in the opposite direction. The bus driver told me that after reaching the end of the route, the bus would turn around and head back towards the train station, stop across the street from the train station (where I should have got on the bus), and then head towards Piazza Garibaldi (3 stops later). There went my saving time taking an earlier faster train back from Trieste! I did get a nice tour though of an area of Udine I would have never seen if I was not on that bus.

A little while later, I wanted to make sure I understood what the bus driver said before getting too far from the centro. I went  back up to ask the bus driver again just to make sure I understood what he said the first time and since I was talking to someone who probably knew about the bus to Aquileia, I also asked him where I would find that bus. He assured me that we would eventually stop at Piazza Garibaldi and also told me that the bus for Aquileia was located across the street, down a little from the train station at the autostazione, which is not the stazione (train station) but the autostazoine (bus station)! I guess it was a good thing that I took the wrong bus!

As we started back towards the the train station, the bus driver called me up and showed me just where the autostazoine was located. He also asked me where I was from, why I was in Udine, where I learned to speak Italian, etc. We ended up chatting all the way until we got to my stop. I was very lucky to be on a bus with a very nice bus driver!  That bus ride ended up being one of my most memorable bus rides of my trip. I really need to remember though that often the bus returning to your destination is located on the opposite side of the street!

Once back at my hotel, I checked on the computer I was borrowing for the locations of a couple of self service laundromats I wanted to check out. I usually just wash my clothes in the sink at my hotel in the evening and hang them to dry using a rubber braided laundry cord, but I had jeans I wore on the airplane that I wanted to wash in a laundromat. Jeans don’t dry that well overnight.

The first laundromat I went to – Lavanderia Self Service on Via Caiselli, 23, was located not that much farther than Oggi Gelato. It was on an little corner street next to this place that looked like a store selling interesting food items called L’Alimentare. I checked out the Lavanderia Self Service first. If I remember correctly, there were 4 smaller washers and 2 larger washers. I think the same for dryers and I think it was about 8 euros total for the combined washer/dryer price. There were very clear directions as well as photos describing the steps to use each machine. There was a place to insert paper euros and another place for coins. It seemed pretty clean except for where you insert the laundry soap. There seemed to be caked and goopy leftover soap and softener in the slots from previous usage. I cannot use scented laundry detergent and do not use softeners (because of the scent). This was my only concern.

I went back to the little food shop, L’Alimentare to check out the foods they were selling. I found out that not only did they sell food items such as sauces, pasta, olive oil, wine, etc., but they also had prepared foods you could warm up and eat there or take to go.  Since it was getting late and I had not even thought about dinner yet, I decided to order some food to go. The people who run this place were very nice. I ordered some eggplant parmigiana, some pecorino cheese, and a french mango fruit juice drink.

Next, I headed to the second lavandaria, called Lavandaria Self Service SPLASH & PET WASH, which was located onVia Pracchiuso, 19. This is not the only splash & pet wash in Italy! I found some others on the internet in many of the places I was staying. I put the address in my phone and used google maps to find it. It was located a bit farther from where you will find the tourist information center.

The directions took me past Piazza Primo Maggio. There I found a huge food fair happening. I saw a Despar ’17 Festival sign and figured this was part of the Despar Festival Amy, Larry, and I saw happening at a church not too far from my hotel when we were exploring Udine on Thursday. We weren’t sure what it was all about, but I thought I this must be part of the festival. There were stands all along the huge circle surrounding the piazza. Most were food stands but there were also stands with other items such as hats, shoes, clothing, trinkets, etc. Many of the stands represented countries such as Portugal, Spain, Mexico, France, Austria, Slovenia, Israel, Greece, USA (New York cheesecake), the Netherlands, England, Switzerland, and so many more places! Other stands represented different regions of Italy. Here are a few photos from that evening…

The pet wash laundromat was very clean BUT it did not allow you to use your own laundry soap. That was a deal breaker for me. Instead, the machine added soap that was somehow already in the machine. I did not want to take the chance of having my clothes washed with a scented laundry soap.

I returned to what I thought was the Despar Festival and found a picnic table, where I ate my eggplant parmigiana. I saved the cheese for later and went in search for a dessert. It was between the cannoli stand and some baklava. I really wanted both but did not have room, so went for one of the cannoli. YUM!! It was so rich, I was only able to eat about a third of it. I saved the rest for breakfast the following day.

I came across this cool “urban hugs” art display on my way home. The world sure needs a few more hugs! 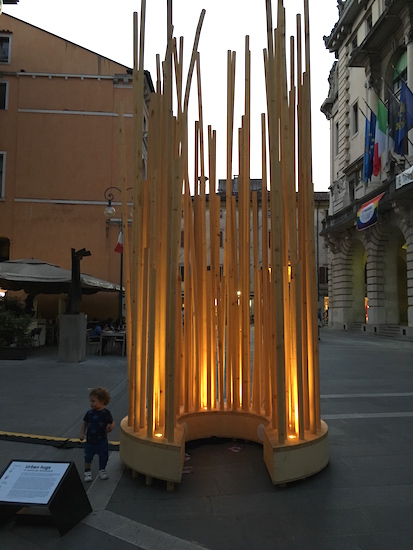 Next up – Saturday in Aquileia