Sunday, July 5th:
After a frustrating train experience Lucca to Firenze (train story 2), my train ride from Firenze to Bologna was very pleasant. I sat across from a very nice girl who was traveling in Italy with her family for the first time.

When I arrived in Bologna, the train station was bustling.  The city of Bologna however seemed almost deserted as the taxi drove me to my hotel.   Hardly any cars on the main streets and most of the sbops were closed.  Taxi driver was nice. The fare cost €8.50.

As I checked into my hotel, before even being asked for my passport, I was surprised with a very thoughtful gift from Sandra.  Thank you!! :)

I unpacked and then went out to hang out in Piazza Maggiore (the main piazza).

I realized that I did not have any lunch. It was a little too early for dinner so I headed over to Grom and ordered my favorite combination – caffe and pistacchio. The gelato was heavenly. 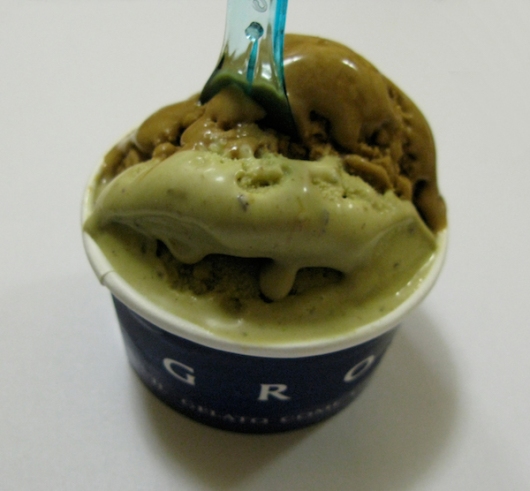 On Sundays, many restaurants are closed, including the restaurant I had hoped to eat at. Allessandra, one of the very kind women who worked at the front desk at my hotel recommended Zerocinquantuno (051).  This is a new place that opened just three months ago, located right next to the Duomo in Piazza Maggoire.  It is more of a bar but there are also few dinner choices on their menu.

I ordered my favorite tortelloni burro e salvia & a caprese salad. The prices were very reasonable for a place right by the main piazza with great views.

The bells started to ring while I waited for my food.  An older Italian couple sat at the table next to me. The woman asked me where I was from. They were amazed that I traveled so far and all alone. We had a nice conversation during dinner. My food was just ok. The service was good and the view was wonderful.

I was tired after a long train travel day. I went back to my hotel after dinner and hung out in my hotel, watching TV.

Next up – Monday in Bologna