I started drinking coffee when I was 5 years old. I drank coffee off and on much of my life, never really giving the taste of coffee much thought until the summer of 1999 when I drank my first Italian cappuccino in Italy. I now consider myself a coffee snob. I no longer drink American coffee and am very picky about my espresso.

I have owned two espresso machines. The first was a Capresso I bought at Macy’s. It never really made a great espresso. It lasted three years.

The second was a Gaggia. Sadly, my Gaggia espresso machine bit the dust in September. With perfect conditions, I was able to make a pretty good espresso, but I could not replicate it daily, partly because I did not have a good grinder. I would stop at the store and grind small amounts of coffee every 2-4 days but that is not the same as grinding your coffee daily.

I loved making my espresso on the weekends. But it was getting more and more difficult to make my espresso and then get out the door on time during work days with the traffic here. Making a good espresso takes time in the morning, time that I often did not have.

Last January, I made the difficult choice of giving up coffee. I chose sleep over coffee and put my Gaggia machine into early retirement. My mistake was not descaling it once I stopped using it. I started thinking about coffee again during the summer. I dusted off my machine and attempted to get it running again. After a few weeks of trying to get it to work, I gave up.

In the end, I decided that the cost was just too much along the added hassle of having to deal with a mainland company if something went wrong, also the reason I did not pursue getting my Gaggia fixed.

My other concern was the space needed for the two machines (I have a tiny kitchen with very little counter space) and then there still was the time factor to make a good cup of espresso in the morning. So once again, I gave up the thought of drinking coffee.

Then a week before Christmas, I had the brilliant idea of checking out the Nespresso machines. George actually spurred me on when I saw one of his commercials on YouTube. Now if only George came with my machine…

The funny thing is that I briefly thought about getting a Nespresso machine a year ago after putting my Gaggia into retirement realizing it would be a quick way to make an espresso in the morning. At that time though I already owned a machine and thought it would be silly to buy a second machine and I wondered it these machines actually made a good espresso and questioned the freshness of the coffee in the capsules.

So, I started researching Nespresso machines. I was surprised to find so many positive reviews, both on the taste and the ease of making a cup.

Besides the question about the taste, my concern was that the machines only work with the Nespresso coffee capsules and the capsules must be bought from Nespresso. Most reviews indicated that it was very easy to purchase the capsules online. The regular capsules cost 55 cents each. The shipping cost was a standard $4.95. After calling Nespresso, I was told that a minimum of 5 sleeves must be ordered (50 capsules) and the cost was $6.95 $11.95 to Hawaii.

Doing the math, it would take a minimum of three years for the difference in cost between the capsules and loose coffee purchased to equal the extra cost of purchasing both a new espresso machine and grinder. The ease of making espresso every morning alone would be worth the extra cost to me.

The environmental impact using the capsules was another concern. I read about recycling options in Europe. My hope is that these options will eventually spread to the US. Meanwhile, I would try to figure out a way to recycle the capsules.

I read that if there any problems with the machine, Nespresso will send a loaner machine to use while they fix your machine. I believe the cost to send the machine to Nespresso is free and the same standard shipping cost as for any other product ordered is charged to have the repaired machine shipped back.

I found out that Williams-Sonoma, a store we have in Honolulu, sells the Nespresso machines. That meant that I could check out this machine in person. On the Williams-Sonoma site, the machine I was interested in, the Nespresso Essenza C100, came as a package deal bundled with an Aeroccino Plus Automatic Milk Frother. It also came with two cups, one espresso cup and one cappuccino cup.

The Nespresso company was also having a special promotion which made this bundle an even a better deal. If you purchased a machine before January 17th, and it cost $299 or more, you could get a $50 credit for the Nespresso capsules. Amazon had a similar bundle offer without the cups for $269, without the $50 credit from Nespresso.

I did not want to commit though until I tried an espresso made from a Nespresso machine.  I braved the Christmas madness three days before Christmas, heading to Ala Moana (the big shopping mall in Honolulu).  I was on a mission.  I went straight to the Williams-Sonoma store and asked the guy in the coffee machine section if I could try an espresso from a Nespresso machine.  I was a little alarmed when he brought out a paper cup. At least it was not a styrofoam cup!  I guess it is not realistic to expect Williams-Sonoma to wash coffee cups.

I had already watched a few videos on how easy it is to make an espresso using the Nespresso machine. It was even more amazing to see it done in person. Literally 30 seconds and the espresso was made. My drink of choice is a caffè macchiato (espresso with a tiny bit of milk) OR an espresso with a tiny scoop of ice cream so I asked the guy if he could also froth some milk.

WOW! It was a very good espresso. I was sold. I was ready to buy this machine right there and then. BUT… there was the question of the two cups. The guy checked and told me that the cups only came with the online deal. The Cube (another machine) did come with the cups but the cost of this bundle was just under $299, meaning I would not qualify for the $50 credit, and the machine was larger, taking up more room on my limited counter space.

I decided to order the machine online instead. I would just have to wait a little bit longer. When I got home, I went back to the Williams-Sonoma site, put the machine bundle package in the cart and clicked the button “add to add to basket”. When the button took me to the next page, a message in red said that the Nespresso machine and frother would not be available until February! Well that was out.

I could drive back to Williams-Sonoma to purchase the machine just before Christmas and deal with the craziness at the mall or I could order it from Amazon without qualifying for the $50 credit. I continued to check the Williams-Sonoma site, hoping that their supply was restocked and continued to check the price at Amazon, hoping it would either go down to $250 or go up to $299 to get the $50 credit.

At one point, I noticed on Amazon that the price went down to $233.  Perfect!  But wait… in fine print, it said that this product would not ship for 4 to 6 weeks.  Everyone must be ordering these machines for Christmas.  I still had the option to drive back to the store. Meanwhile, I continued to check both sites.

On Christmas Eve, I could not believe my eyes. The price on Amazon dropped to $209! I hit that button and bought it!  It would be my new Christmas present to myself!  Heck, I waited this long, I could wait a few more weeks to start enjoying my morning espresso again. Two days later, when checking the shipping info, the fine print saying that the machine would not ship for 4-6 weeks was gone. Amazon had the machines back in stock and my machine was being prepared to ship!

I was very excited.

At 11:15, it still did not say that the package was delivered. I decided to check the official UPS site. That was when I saw this…

Your package has experienced an exception.
THE RECEIVER IS ON A HOLIDAY. DELIVERY WILL BE ATTEMPTED
WHEN THE RECEIVER RETURNS / PACKAGE WILL BE DELIVERED
NEXT BUSINESS DAY-NO SATURDAY GUARANTEE

That meant waiting 4 more days for my package to be delivered with a holiday on Friday. 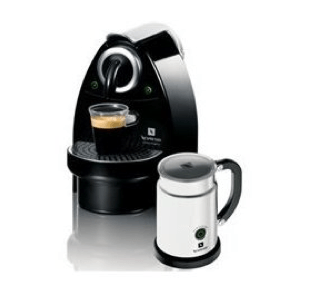 13 thoughts on “my Christmas present to myself”