Anyone who knows me well knows that I love climbing towers. Bologna is not only known for its food, but it is also known for its towers. At one point in history, many have said that there were up to 180 towers in Bologna although more recent studies now suggest that the number is closer to 80 to 100 towers.

Click here to see a panoramic picture of Bologna in the 11th century.It must have been amazing living in Bologna with all of these towers! I wonder how many could be climbed. I am guessing many of them, although probably not by the public. If you look carefully, you will notice that one of the towers in the photo looks like it is falling over.

I was thrilled when I finally was going to climb this tower in 2007. It was one of the towers on my list to climb since 2000 when I first spent a few hours in Bologna. The Asinelli Tower is a very a challenging tower to climb. I believe there are 498 steps to the top although I can’t confirm this as I lost count on the way up. I plan to write a post probably in March sometime about all of the towers I have climbed.

If you want to learn more about these towers, Wikipedia has a nice article called “Towers of Bologna”. The New York Times also has a Frommer’s Review article called “Tower of the Asinelli (Torre degli Asinelli) & Tower of the Garisenda (Torre degli Garisenda)”. You may need to subscribe to the New York Times for the second link to work. (link no longer works but if you subscribe, you may be able to search for this article)

After narrowing down my photos of the two towers and my climb to the top, I realized that there were still too many photos to post. I originally made a Picasa slideshow. Since Picasa is no more, I am updating (same photos) with a square tile display.  Click on the first photo to browse the photos as a slide show. Click on the right arrow to see the next photo. To close the photo display, click on the x up in the top left corner.

Heading to the towers. 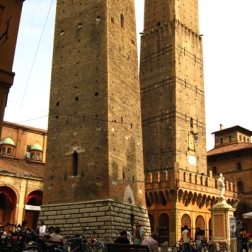 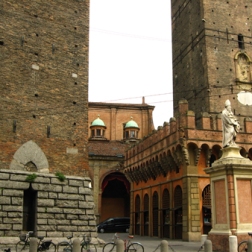 The entrance to the Torre Asinelli.

Will these stairs ever end?

The view partway up out a tiny window. 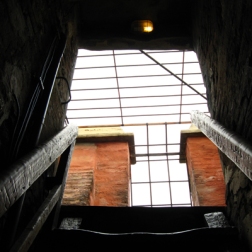 Stunning views from the top… 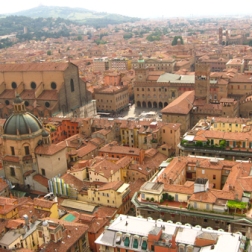 You can see the Sanctuary of the Madonna of San Luca is in the distance. 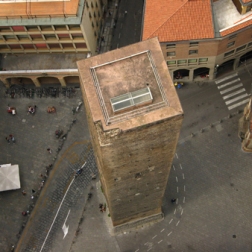 Looking down at the Garisenda Tower.

**While updating this, I realized I have not yet written that tower post. I’m putting it on my list!