Each time I make this long long trip, I ask myself, “What was I thinking?”, but once I arrive in Italy, all is forgotten and I am so happy to be back again!

This was the first time I checked myself in using my e-ticket confirmation number. The line was very short (only one person in front of me) and it took just a few minutes longer to get my bag checked in. The man that helped me check in my bag lost my baggage claim ticket. I saw him looking around for something for a few minutes. He then gave me a blank Continental envelope and wished me a good flight. I asked him where the claim slip was and he told me that he lost it. I was not moving until he reprinted it or found it. He looked annoyed, but agreed to keep on looking and finally found it in the rubbish can!

The line through security was short, about a 5-10 minute wait. All went smoothly and I was not searched. Both plane rides were also very smooth. A very cute Australian man sat next to me on the Honolulu to Newark flight and a very kind woman from Florida/New Jersey sat next to me on the flight from Newark to Roma. She was on her way to spend time in Calabria with family.

On each flight, every seat had an individual screen where there were about six stations with various movies playing, which helped me get through each long flight. I would fall asleep and then wake up at different points of the same movie and I don’t think I ended up seeing a complete movie but it helped the time go by quicker.

Once I arrived in Roma, it took about 5 minutes to get through the passport control area and then AN HOUR to get my one checked bag. Everyone was worried at first that perhaps there was a strike. Once I retrieved my bag and shuffled things around to help with the weight, it was much easier to travel.

It was now about 10 past 9 in the morning. I had a little time before the train arrived and so I stopped to have my first espresso. YUM!! I also bought an eggplant and cheese panino which was just ok.

The train was due to arrive at 9:37. IN RITARDO…the train was LATE. No announcement, just more and more people arriving and looking impatient until the train finally arrived about 10 minutes past 10. It was then mass confusion as everyone insisted on pushing towards the doors to the train while simultaneously, all the people on the train tried their best to get off the train. We all finally managed to get on board and find seats with no one hurt (at least no one that I saw).

It is supposed to take 30 minutes to travel from the airport to the Termini in Roma. My lucky day! This train took over an hour! It stopped in the middle of nowhere four times. Each time, more and more people called or were called on their cells to discuss the train delay.

When we finally arrived, again, mass confusion!! Tons of people trying to go both ways (to and from the train) from the time we stepped onto the platform until we walked the length of the train and turned the corner to get to the rest of the binarios (train tracks). There was also a HUGE crowd of people waiting at the end of the platform with train workers holding them back until everyone from the train got past them.

I originally had almost four hours between the time of arrival and the time my train left Roma for Spello. I now had 10 minutes to get on that train before it was scheduled to leave. I made it with two minutes to spare!

Once on the train, I found out that there would be a 10 minute delay before the train would leave the station. The train was pretty empty and the ride was smooth all the way to Foligno. Once I arrived in Foligno, I misread the Partenza board and thought that my train and another train were both scheduled to depart from the same binario. Luckily after some back and forth conversation in Italian with a group of men in their early 20’s, I was able to understand that my train left from a binario in a different area. Because my train from Roma was delayed by 10 minutes, I now had about three minutes to get to my next train. Two other women were running for the same train I needed to catch and encouraged me to run with them. We made it with a minute to spare and 10 minutes later I arrived in Spello.

I’d heard and read about this hill that I would have to walk. I figured, I have walked hills before, how bad could it be? Well, with my luggage in tow, it was quite a hill. 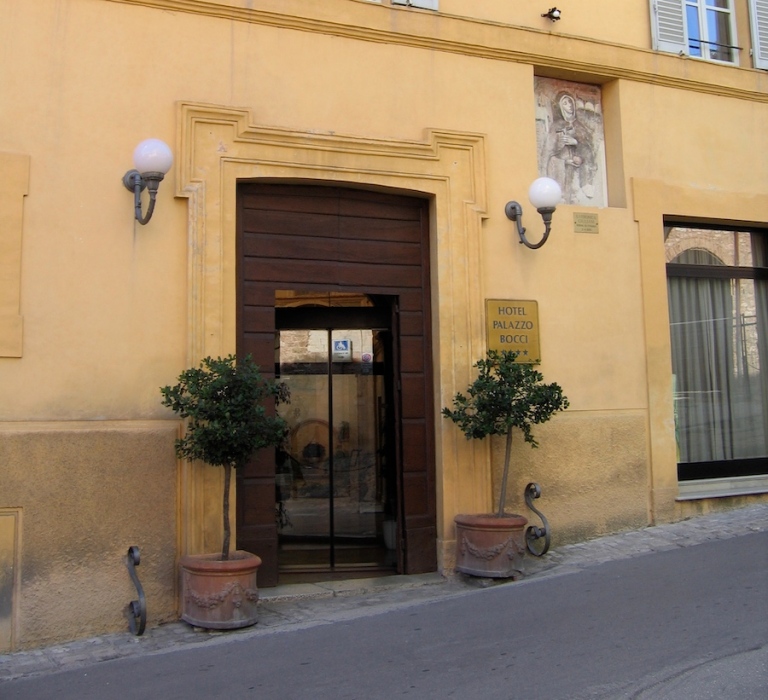 My hotel was wonderful! The people at the desk were very kind and helpful. My room was very spacious with a great view.

The weather was COLD! Luckily, I decided to check the temperature before leaving and saw that it was in the 40’s/50’s at night! I packed some long underwear but forgot my warm fleece! Hopefully, it will warm up soon!

I unpacked, stopped back at the desk to find out information about towns nearby, and received my package from Katia. I now had my very own Italian cell phone! After reading about all of the choices on how to get an unlocked cell phone and how to get an Italian number, my friend Katia offered to get the phone for me, set it up with an Italian phone number, and send it to my first destination. Now, to learn how to use it! Once charged, that became my task for that night or the next day.

I walked around the town a for a while, took a few pictures… 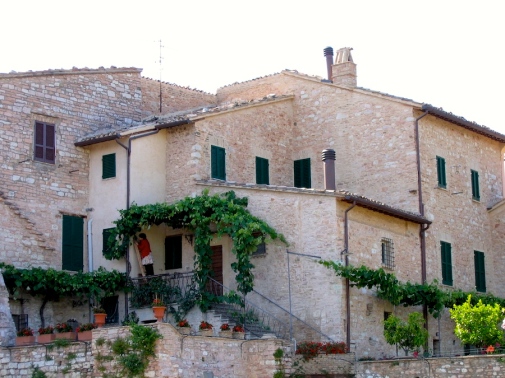 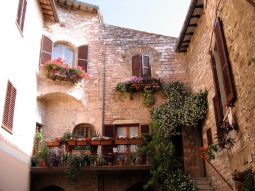 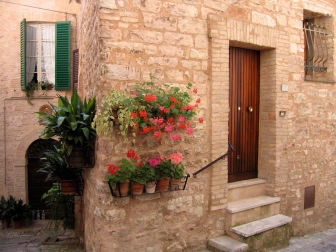 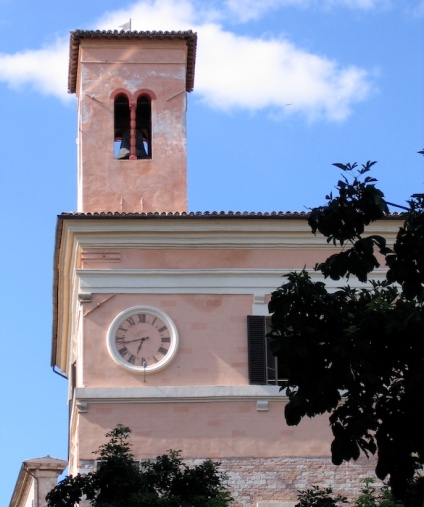 I bought my first gelato (even though it was COLD outside) and found a sliced pizza place. Not my first choice, but I knew I would not make it until eight to eat dinner out. Jet lag was definitely setting in and it was time for bed.